Who is Edward Snowden? 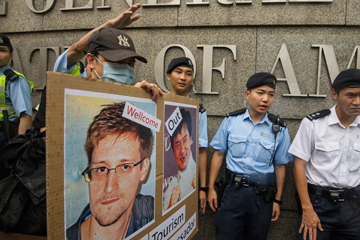 Hong Kong police officers stand guard outside the American Consulate in Hong Kong during a demonstration of support for Edward Snowden (pictured left on the sign) in June 2013.
Gareth Gay/Getty Images

He's been called a hero and a traitor. The man behind what some say are the most important and others the most dangerous intelligence leaks in recent U.S. history is a 30-year-old technology worker who did a stint with the CIA before signing on with defense contractor Booz Allen Hamilton. Working on an NSA contract in Hawaii, Snowden copied certain classified documents and removed them from his office before telling bosses that he needed a few weeks of leave in order to undergo epilepsy treatments. He then holed up in Hong Kong as word of the NSA spying programs he'd exposed by sending those stolen documents to the press spread like wildfire [source: Greenwald].

Raised in Maryland near NSA headquarters, Snowden earned a GED before enlisting in the Army in 2003. He was later discharged after breaking his legs in a special forces training program. According to Snowden, he worked as an NSA security guard and then in IT security for the CIA. By 2007, the CIA had sent him on assignment to work in Geneva, Switzerland [source: Greenwald].

So how did a guy with a GED rise within the ranks of the nation's premier spy agency and later move on to a $200,000-a-year (or $122,000, depending on who you ask) systems administrator gig at Booz Allen? In an interview with The Guardian, Snowden credited a natural knack for computer programming and technology work [sources: Greenwald, The Washington Post].

Nevertheless, Snowden remained a relatively low-level employee on the national intelligence scale before the leaks. Some experts have said that he was able to get the information he divulged because of the widened sharing among agencies in the wake of Sept. 11. The leaks are also a good example of just how much access Uncle Sam has given private contractors to highly sensitive information following the attacks on the World Trade Center and the Pentagon. Roughly 70 percent of the U.S. intelligence community's budget goes to paying contractors who have been brought on in droves to fill gaps identified following 9/11. In the post-Snowden era, however, lawmakers are reconsidering the business of outsourcing the intelligence work originally intended for the NSA and other government spy groups [source: Bussey].

Want to learn more about government intelligence gathering operations? Take a look at the links below.

Author's Note: How the NSA Works

I will not use this space to make bold proclamations about whether Ed Snowden did or did not do the right thing. I will use it to argue that NSA should have known that he was doing something that they would not be too happy about. I mean come on: look at that skin tone! The guy lived in Hawaii and he somehow maintained the complexion of a ghost. If that's not the surest sign that a fella is up to something, I don't know what is.