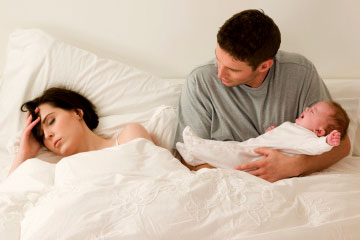 Parenting can do a number on a couple’s sex life.
OMG/Photodisc/Getty Images

The year 2011 brought its own bundle of joy to pregnant women and their partners. According to a conclusive analysis published then in the Canadian Medical Association Journal, sex while expecting poses no harm to a healthy developing fetus [source: Rochman]. That pronouncement roundly discredited popular, though misguided, superstitions that intercourse and orgasmic contractions could potentially rupture a uterus or induce childbirth too soon. In fact, a woman's libido may crest during her second trimester due to pregnancy-related lubrication and engorgement in the genital area [source: Mann].

After delivery, sex is probably the last thing a new mother craves. Typical doctors' orders advise no hanky-panky for at least four to six weeks following childbirth, giving plenty of time for the body to heal [source: Mayo Clinic]. But just because sex may be physically safe for new moms after that recovery window doesn't mean they'll automatically be in the mood. It's common for motherhood to correlate with a drop in sexual desire for many reasons. A 2005 study out of Sweden conducted extensive interviews with new mothers about their sexual attitudes, and the women voiced common concerns about negotiating their pre-partum and postpartum bedroom lives. Not only did many of the participants prefer sleep over sex due to the schedule demands of caring for a newborn, the mothers also expressed anxiety over their altered post-baby bodies [source: Olsson]. On the up side, a majority of the interviewees also expected their libidos to rebound in the near future.

If, however, those new mothers were breastfeeding, it might've taken longer than expected for that lovin' feelin' to rekindle. Women who breastfeed commonly complain of lackluster sex drives -- likely a direct result of hormones. Prolactin stimulates milk production, simultaneously lowering the amount of estrogen and testosterone in the bloodstream, both of which are related to arousal [source: Boston Women's Health Book Collective]. Ironically, researchers at University of Chicago published a study in 2005 that claimed breastfeeding women emit a chemical signal that incites sexual arousal in non-nursing women [source: Peres]. Nursing women, on the other hand, often have to wait until a child weans to experience a rebounded sex drive.

Postpartum libido loss aside, couples that transition to parenthood face long-term challenges to keeping the spark alive. Despite the initial joy of expanding a family, having a baby often marks a downturn in marital satisfaction for as many as two-thirds of couples [source: Zimmerman]. As of 2009, in fact, more than 25 studies identified a significant dip in nuptial bliss after babies enter the picture, followed by a return to happy harmony after grown kids fly the coop [source: Coontz]. A growing body of research also suggests that lesbian parents may enjoy slightly higher relationship satisfaction due to more even division of housework, but overall they mirror their heterosexual counterparts [source: Lamb].

Teasing apart that underwhelming data does offer a heartening nugget of wisdom for women wishing to become mothers: Couples that experienced intended pregnancies that they equally agreed upon demonstrated the most relational resilience during the parental transition [source: Lawrence]. In other words, when it comes to motherhood, it pays to plan ahead. Just don't expect to be fully prepared for everything that goes along with raising a baby, as any mommy brain out there can fully attest.