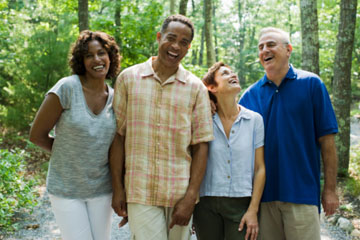 Who are the baby boomers, and why do the media love to write stories about them?
Comstock Images/©Getty Images/Thinkstock

Media outlets like to poke fun at the baby boom generation. Headlines such as "Boomers Hit New Self-Absorption Milestone: Age 65" mock this famously self-reflective demographic. From their diaper days to their approaching dotage, the boomers have been history's most documented generation. In the '60s, when the first boomers were entering adulthood, their civil rights sit-ins and Woodstock antics made headlines. In 1986, the first boomers turned 40, and Time Magazine ran a cover story on them. As boomers reach retirement age, the media frenzy continues with article after article on how youth-minded boomers are redefining old age.

What have baby boomers done to warrant such attention? First, they were the first generation weaned on television. Documentation itself was revolutionary. Second, their sheer numbers give them a huge market share; it's no wonder the media -- and their advertisers -- are interested in scrutinizing and catering to one of the largest demographics alive today. Finally, boomers started off with a bang. In their youth, many of them marched for civil rights and some protested the Vietnam War.

Now that the first boomers are retiring, however, some pundits claim the boomer legacy will prove more mixed than messianic. "Better educated (twice as likely to go to college as their parents), idealistic and assertive, baby boomers were expected to remake the world," read Time Magazine's 1986 cover story, "but… a lot of shadows have fallen between the dream and the reality" [source: Time Magazine]. Author Jeff Gordiner puts it even more bluntly in his nonfiction book "X Saves the World": When it comes to changing the world, the boomers choked." Other social commentators beg to differ. Boomers are not merely "a collection of self-absorbed, latte-drinking narcissists who threw a tantrum in the 1960s and haven't stopped whining since" argues author Leonard Steinhorn, who has authored many works about the baby boom generation, including "The Greater Generation: In Defense of the Baby Boom Legacy." Instead, Steinhorn asserts that the world has the boomer generation to thank for the increased tolerance and career opportunities enjoyed by women and minorities today [source: Steinhorn].

So, who exactly are these baby boomers? We'll examine a slew of baby boomer facts in the next section.