Motherhood in the Mind: From Baby Fever to Baby Blues 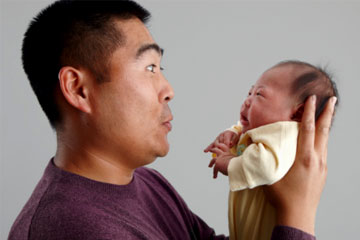 Plenty of adult women have probably experienced something along these lines: They're out in public, grocery shopping or strolling in a park perhaps, and a cuddly, giggly baby with pinchable, chubby cheeks crawls into their sight lines. Then suddenly, out of nowhere, they come down with so-called "baby fever," the symptoms of which include sighing wistfully during diaper commercials.

In 1891, the world's first evolutionary psychologist, Edward Westermarck, coolly explained this phenomenon as a "universal child-bearing instinct" that nudges both men and women toward reproduction [source: Rotkirch]. More than a century later, scientists still haven't entirely explained the biological underpinnings of mental reproductive mania, but they have confirmed that "baby fever" exists for men and women alike. In their late 20s, especially, as many as 58 percent of men and 78 percent of women develop overwhelming, and sometimes fleeting, desires to procreate [source: Clark-Flory]. Interestingly, for men, baby fever becomes more common after fathering their first child, whereas women's susceptibility to it lessens following new motherhood [source: Rochman].

That gender difference may have to do with the mood swings associated with childbirth. In the 24 hours following delivery, a woman's levels of estrogen and progesterone plummet to their pre-pregnancy levels, commonly triggering mild depression [source: A.D.A.M. Medical Dictionary]. Doctors refer to those first couple weeks of crying episodes, sleeplessness and loss of appetite as run-of-the-mill "baby blues." However, when those blues persist into the first couple months of new motherhood, postpartum depression may be to blame. Thirteen percent of pregnant women and new mothers experience depression, which may be attributed to hormonal fluctuations and going off of antidepressant drugs while expecting [source: U.S. Department of Health and Human Services]. Although baby fever can ultimately spiral into baby blues and postpartum depression, the latter two mental health conditions are treatable through maternity-safe medications and talk therapy.

Once women get over the initial postpartum hump, the stress of raising a child doesn't disappear by any stretch, especially since they arrive at yet another life-altering crossroads: to work or not to work?

In February 2012, the National Center for Health Statistics announced the U.S. teen birth rate had dropped to its lowest level since 1946, when the agency first began gathering data [source: Park]. Teen birth rates in the United States topped out at 61.8 per 1,000 women in 1991, settling down to almost half that -- 34.4 per 1,000 women -- in 2010. Countries with even lower teen pregnancy rates include Sweden, France and Canada [source: Darroch et al].