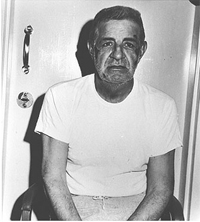 The details of a Mafia induction ceremony were a carefully kept secret for decades. But in the early 1960s, Joe Valachi's testimony before a Senate subcommittee shined a spotlight on the mob. The Mafia induction described here is the ceremony conducted by the Sicilian Mafia as well as most American Mafia families. Circumstances can alter some of the details of the ceremony, such as an induction in prison or a quick induction during a gang war.

First, the potential gangster is told simply to "dress up" or "get dressed." He is taken to a private place and seated at a long table, right next to the boss. Other Mafioso who are present will join hands and recite oaths and promises of loyalty. The inductee must then hold a burning piece of paper. In some families, the new soldier is paired with a more experienced mobster who will act as his "godfather," guiding him into Mafia life. The inductee must promise that he will be a member of the family for life, and then a drop of blood is drawn from his trigger finger.

It takes more than just an oath and a drop of blood to get into the Mafia, however. Only men of Italian heritage are allowed in. In some families, both parents must be Italian, while some only require an Italian father. The prospective mobster must also show a penchant for making money or at the very least a willingness to commit acts of violence when ordered to. Usually, the criminal must pass a test before he will be considered for induction, and this test is commonly rumored to be some sort of participation in an act of murder.

There is one last obstacle that some mobsters face when they try to become made men -- the Commission. In the 1920s and '30s, the Mafia families in the United States were almost constantly at war with one another. They would often recruit new soldiers by the dozens so rival families wouldn't recognize them as enemies. These new recruits could easily approach members of other families and assassinate them. To put a stop to this, the Commission began requiring all the families to make a list of their prospective members and circulate the list among the other families. In addition to eliminating unrecognizable family members, this also allowed the bosses to weed out prospectives that other families had problems with. If those prospectives became made men, individual disagreements could grow into violent wars between families.