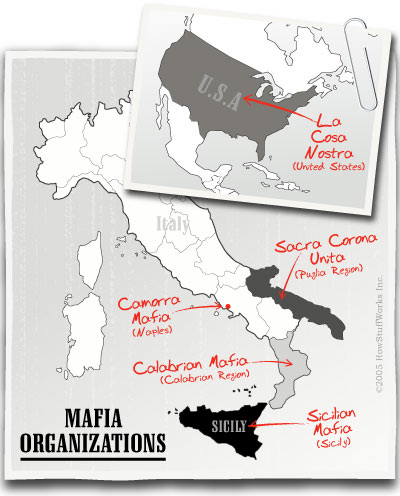 The Mafia is not an actual organization itself. There is no head of the Mafia. Instead, the word Mafia is an umbrella term that refers to any of several groups of gangsters who can trace their roots to Italy or Sicily.

In broad terms, there are five Mafia groups, defined mainly by the regions they operate in or the regions they originated in. All five groups have their hands in criminal operations that span the globe and have set up operatives in many different nations. The Sicilian Mafia originated on the island of Sicily. The Camorra Mafia began in Naples, and the Calabrian Mafia originated in Italy's Calabrian region. The Sacra Corona Unita is a more recent group based in the Puglia region of Italy. Finally, La Cosa Nostra is the American Mafia, although this group can trace its history back to Sicilian families as well as some of the other Italian groups.

There isn't a clear naming convention when it comes to Mafia families. Early families were named after the region or town in Italy where they came from. Sometimes, the name of the family would change to the name of the boss, especially if he was a powerful or long-standing boss. The five main New York City families had their names set semi-permanently by the testimony of informer Joe Valachi before a Senate subcommittee in 1962 and 1963. The families were named for the current bosses, although in one case, it was an earlier, more powerful boss whose name would be used. These five families were the Bonanno, Genovese, Gambino, Luchese and Profaci. The Profaci family was taken over by Joseph Colombo a few years later, and he became so famous that the family is now known as the Colombo family. The same thing nearly happened to the Gambino family when it was taken over by John Gotti -- but before it became the Gotti family, Gotti was arrested and convicted of racketeering and murder, based largely on the testimony of Mafia traitor Sammy "The Bull" Gravano.

Vito Genovese (in his 1969 mugshot) began his career working under "Lucky" Luciano and ultimately became one of the most powerful bosses in American Mafia history.

Most of the other U.S. families are simply named for the city they operate in. Thus, you have the Philadelphia family, the Buffalo family, the Cleveland family and so on.