The Voice of Millions 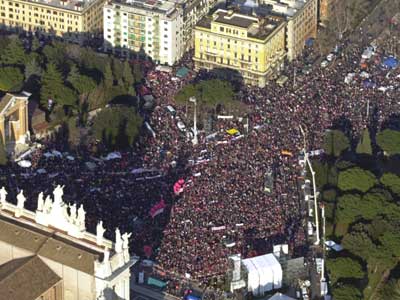 Protesters fill St. John Lateran square during an antiwar rally in Rome on Feb. 15, 2003. An estimated 3 million participants turned out for the event.
AP Photo/Plinio Lepri

The Earth is currently home to an estimated 7 billion people, distributed among roughly 240 countries, 6,912 languages and more branches of religion and personal belief than can be counted easily. Our numbers continue to grow to this day.

Yet there are still events and causes that can unite mere millions of us. Wars have long brought together millions in pitched battles. In 480 B.C., the Persian Army marched into the Battle of Thermopylae with between 200,000 and 500,000 men. More than 2,000 years later, in 1943, the Soviet Union's Red Army suffered more than a million casualties at the Battle of Stalingrad. Still, humans often come together for reasons that don't involve massive invasions by foreign forces. During January 2007, an estimated 60 million Hindu pilgrims gathered at the convergence of the Ganges and Yamuna rivers in northern India for the Ardh-Kumbh Mela, or festival [source: BBC].

When it comes to protests, the book of Guinness World Records currently lists the Feb. 15, 2003, Iraq War protest in Rome as the largest antiwar rally in history. The event drew an estimated crowd of 3 million. On that same day, protesters gathered in nearly 600 cities in a coordinated global effort to express moral outrage against the U.S. invasion of Iraq. This included a reported 1.3 million protesters in Barcelona, Spain, and between 750,000 and 2 million protesters in London [sources: Guinness Book of World Records, BBC]. All told, between 6 and 10 million people participated in the global protest [source: BBC].

Of course, not all protests are rallies. During the early 20th century, Mahatma Gandhi led millions of Indians in protest against British rule through noncompliance. Indian public officials resigned, parents withdrew their children from British schools and participants boycotted British goods. Exact figures for such a movement are difficult to calculate.

Next we'll look at the controversial 2012 anti-piracy bills that triggered the largest online protest in history.