The Rise and Fall of Jelly Shoes 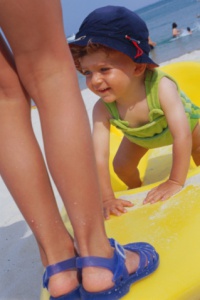 Since the early 1980s, jelly shoes have ridden the fashion rollercoaster steadily. And although they are, perhaps, best associated with the '80s, they definitely still appeal to today's consumers. There was a surge of new or slightly more grownup buyers in the mid '90s, and another in the mid '00s. In 2006, Grendene manufactured some 131 million pairs [source: Grendha].

In the world of injection-molded soft plastic footwear, there are now also loads of shapes, so to revisit jellies, you don't have to pick the same styles of your youth. PVC ballet slippers, pumps, flats, thongs, boots and sandals abound. Some come with stylized straps, others sport bows, while still more are adorned with rhinestones and other sparkly accoutrements. For winter wear, jelly shoes can also be lined with warmer interior materials so feet don't freeze.

Jelly shoes can cost just a few dollars, or they can cost hundreds. Some designer pairs can even be found on models striding down runways. Critics of jelly shoes often contend the shoes are uncomfortable, especially when the weather heats up and people's feet start to sweat -- and stink. One fashion reviewer said the shoes are all right for kids, but cautioned adults against making such fashion foibles [source: Rickey]. Still, there will always be some who find the jelly trend fun, funky and functional -- an '80s throwback or a modern style statement.

Regardless of where you stand on the great spectrum of jelly-shoe adoration, one thing is certain: As a fad, they'll likely be back, time and again. So since PVC is so long-lasting, it doesn't hurt to hang onto an old pair. That way, the next time the fashion magazines start raving, you won't need to run out and buy a new pair.