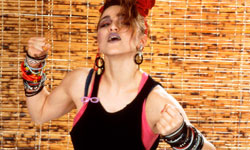 But this quote could also easily apply to that decade's fads, which weren't exactly constrained by much of anything at all. From shoulder pads to boomboxes, the crazes of the 1980s pushed the limits of style and technology in a way that had rarely been seen before. Now, with the growing popularity of '80s-inspired parties and clothing, one has to wonder: Is the decade making a comeback?

Before you bust out your Madonna cassettes and neon spandex, read through our list of 1980s fads that helped define the generation that just wanted its MTV.