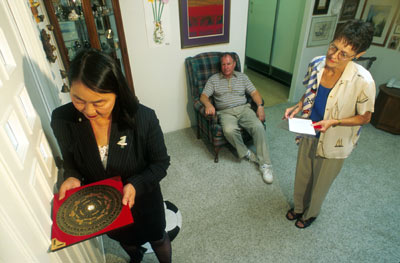 ­India and China both lay claim to feng shui ancestry. Archeologists have discovered evidence that about 5,500 years ago, Indian mystics practiced the principles of "vastu shastra," literally translated as "building science." It's a system that explains how to design and construct buildings, houses and cities. Followers of vastu believe that every building is a living organism with its own energy, and they study the effects of the five elements -- earth, water, fire, air and space -- on the world around them.

According to some historians, about 3,000 years ago, Indian vastu practitioners (typically monks) crossed through Tibet and into China. The Chinese adopted and adapted Vastu principles, which evolved into the various schools of feng shui.

Those in the feng shui camp trace the philosophy's origins to village gravesites that date as far back as 6000 B.C. Most scholars agree that feng shui originated as a method of burial that evolved over time. There is even some evidence of feng shui principles in prehistoric Europe -- Stonehenge, for example.

The Chinese, like the Indians, used the philosophy's design principles to lay out their cities. The Book of Ritual from the Chou dynasty (1030-722 B.C.) describes the plans for a capital city, dictating the use of squares and placement of gates at the four compass points. It is considered the basis for all Chinese city designs, most notably Beijing.

Feng shui made its earliest tangible leap to the United States in the 1980s and has been growing steadily ever since. In recent years, interest in feng shui's architectural and design elements has greatly expanded in North America, Europe and Australia.

You Say Chi, I Say Qi

­Many languages have a word to describe mystic forces.