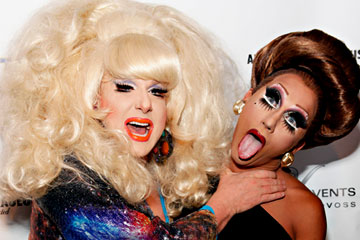 As it usually goes in any branch of show business, success and fame only happens to a slim minority of those who seek out stardom. That goes for drag queens to a greater extent since their niche craft appeals to narrower audiences than more mainstream forms of entertainment. RuPaul, as mentioned earlier, probably is the most successful personality in drag history, but there are plenty of other notable names who have left their glittery imprint on other queens and fans alike.

This is just a sequined handful of drag queens to know:

Danny La Rue: Britain's equivalent to RuPaul in terms of public adoration, Danny La Rue stumbled on his knack for stage craft while enlisted in the Royal Navy during World War II [source: Barker]. During peacetime, La Rue honed his talent for female caricature, and by the 1970s, he'd earned a fortune as one of the most popular stage actors -- albeit costumed like an actress -- in the country. La Rue died in 2009.

Doris Fish: Born Philip Mills in Australia, Fish moved to San Francisco and became one of the colorful city's most beloved drag queens in the 1980s [source: Out]. Fish also wrote and starred in the cult alien film "Vegas in Space." He died from AIDS in 1991, the same year "Vegas in Space" was released.

Divine: Divine befriended filmmaker John Waters in their childhood home of Baltimore when he was still going by his birth name, Harris Glenn Milstead. Waters featured the striking drag queen in a series of his campy films, including the 1988 "Hairspray," in which Divine portrays the protagonist's portly mother Edna Turnblad. Divine died soon after the release of "Hairspray" from complications related to having an enlarged heart.

Dame Edna Everage: Although Australian Barry Humphries, who created the character of Dame Edna Everage, wouldn't likely refer to the purple-haired housewife as a drag queen, her international popularity deserves recognition. Beginning in the 1970s, Humphries hoofed the Dame from Australian stages to Britain and eventually landing her own Broadway show in 2009. Unfortunately for fans, in 2012, Humphries announced he would retire the good Dame [source: Lawson].

Lady Bunny: An entertainment jack (or Jill?) of all trades like RuPaul, Lady Bunny made her name as a multitalented comedian, DJ and actress [source: Gilman]. Known for her signature enormous blonde wig, Lady Bunny also is the founder of the New York drag festival Wigstock that lasted from 1985 to 2005.

To learn more about the fabulous subculture of drag, shimmy on over to the links below.

As someone who has attended her fair share of drag revues, getting to research and write about drag's history and culture was a particularly fun prospect. I was surprised to quickly find out that there hasn't been much mainstream coverage or scholarly research into drag. Cross-dressing in Elizabethan theater often is mentioned as an historical touchstone, which then leaves a centuries-wide gap between it and modern-day drag. When you take a closer look at that intervening time, what's interesting is that men dressing up as women didn't become a countercultural phenomenon until it became associated with homosexuality. As a result, the social response to male cross-dressing for entertainment can also be interpreted as an extension of the broader acceptance or rejection of more fluid models of gender and sexual orientation.

That said, a drag queen probably wouldn't be interested in broaching that level of discourse; she has a routine to nail and a crowd to charm.