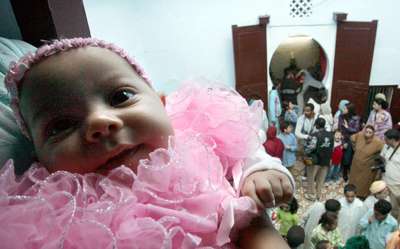 In Morocco, as in most other parts of the world, pink is the color for girls.
Photo courtesy Abdelhak Senna/AFP/Getty Images

Surely you've done it before. You see a small baby and, based on the color of the baby's blanket, decide whether it's a boy or a girl. It's common knowledge that pink is for girls and blue is for boys. But have you ever wondered why? Why is it that boys prefer blue and girls pink? Is it a cultural phenomenon, as many assume? Or does this distinction between color preferences occur on a different level?

This question is exactly what two neuroscientists working at Newcastle University in Great Britain seek to answer. Doctors Anya Hurlbert and Yazhu Ling created an experiment concerning color preferences among men and women. The journal Current Biology published their findings in the Aug. 21, 2007, issue.

The researchers assembled 206 test subjects of both sexes between the ages of 20 and 26 for the study. Most were British Caucasians, but 37 were of Chinese ancestry and were raised in China. The subjects sat before a computer while two rectangles of different colors flashed on the screen. For the purpose of the study, the neuroscientists divided the color spectrum into two halves, red-green and blue-yellow. The rectangles were sorted into these two categories.

The researchers asked participants to quickly choose which rectangle they preferred, and then the computer moved on to another set of rectangles. The findings from the experiment showed that men and women both preferred blue out of this set of basic colors.

When given mixed colors to choose from, the male population of the study showed a wide preference for color blends. But when the women were asked to choose from mixed colors, they tended to prefer colors that moved away from blue and toward the red end of the spectrum, where shades like pinks and lilacs are found. The scientists concluded that the long-held distinction of color preferences among genders had a real basis.

But why? Couldn't these results be due to the participants being raised in a culture where blue is for boys and pink for girls? In other words, couldn't the color preferences be learned rather than innate -- something we're born with?

That's where the Chinese participants came in. To show the pink/blue color preference exists across cultures and is therefore not a cultural construct, the researchers gave the same test to Chinese subjects. The results were similar among the Chinese women and the British women: Both preferred the shades found on the red side of the spectrum.

This lends support to the notion that color preferences among the sexes have a biological basis rather than a cultural one. The researchers hope to support this conclusion with a revised version of the test modified for infants. A very young child, the scientists reason, hasn't yet had a chance to be socialized into a gender role by society. Therefore, any color preferences displayed by babies would have to be innate.

But the question remains -- why is there a distinction among males and females regarding color preferences? Doctors Hurlbert and Ling suggest that the reason is found in humanity's distant past. Read the next page to find out how the origins of our color preferences might be found on the African savannah.

From Africa to the Roaring '20s 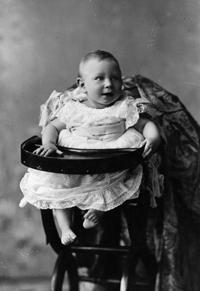 Prior to the 1920s, both young boys and girls wore dresses, usually white -- even the future King of Great Britain (George IV, shown above in 1896).
W. & D. Downey/Getty Images

Neuroscientists Hurlbert and Ling found that women of two distinct cultures tend to prefer red tones, including pink, but why? In their published findings, the scientists suggest that the preference comes from the role assigned to ancient women. Bands of hunter/gatherers composed humanity before the advent of agriculture around 10,000 years ago. In these bands, men generally hunted while the women foraged for fruits, vegetables and other plants.

It's Hurlbert and Ling's view that women became attuned to the reds of the ripe berries and other fruits that would win an ancient woman points among the others in her band. As such, women came to focus on the color red (and the rewards associated with it) in order to make their search easier. The doctors say that this would also come in handy for recognizing flushed faces, a sign of illness, among the women's children.

To explain the preference for blue found among both men and women in the study, Hurlbert suggested that to these ancients bands, blue signified "good weather" and a "good water source" [source: The Guardian].

But this may be a leap from findings to explanation. It's true the researchers found that women tend to prefer colors on the red end of the spectrum. Their findings also find support from previous studies. A 2003 study suggested that women prefer reds because their eyes are physically attuned to see reds better than other colors. This certainly supports Hurlbert and Ling's idea of an evolutionary basis for color preferences. But their answer doesn't encompass all of the data.

For example, it wasn't until the 1920s that Western parents began dressing their children in colors. Prior to this, children of both sexes generally wore white, and both boys and girls of a young age were outfitted in dresses. When the color assignments among boys and girls did evolve in the '20s, the colors were reversed: pink was for boys and blue for girls. It wasn't until around the 1940s that the colors flip-flopped to the assignment we recognize today [source: The Guardian]. This lends support to the notion that the color preference between pink and blue comes from culture rather than biology.

But there are certainly parents who choose to opt out of the pink/blue division for their children and outfit them in clothes of yellow and green. Still, many young girls -- including some who have been raised outside of the typical gender colors -- go through a phase characterized by their unyielding demand for all things pink. Researchers at Princeton University refer to this as the Pink Frilly Dress (PFD) phase.

The Princeton group posits that kids become aware by age two that there are two distinct genders and that they belong to one of them. Securing a place in one's gender is important to a child's psychological development. One easy way for a child to achieve this security is by adopting the color assigned to his gender by society and rejecting the other [source: Princeton University].

Since the Princeton study suggests a combination of both biology and culture is at work in color preferences, the question still remains: Is biology or culture responsible -- or both? Perhaps the answer could be found from a study investigating whether people who are color-blind tend to suffer gender confusion.

For more information on gender and related topics, check out the links on the next page.

How to Tell Someone They Sound Prejudiced
10 People You Probably Didn't Know Were Black
Why Do People Eat Dirt?