How do we achieve global gender equity? 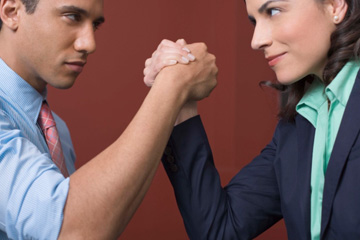 Will power ever be balanced between the genders in this arm-wrestling match that is life?
Jupiterimages/Thinkstock

In 2000, the member states of the United Nations adopted eight Millennium Development Goals to be met by 2015. The goals are designed to help the poorest countries in the world and include benchmarks on environmental sustainability, combating HIV/AIDS and reducing child mortality. One of the goals is to "promote gender equality and empower women."

The fact that gender equality made this list of eight goals approved by the worldwide community speaks volumes. Economists have long argued that women play a key role in lifting a nation out of poverty, yet the traditions and religions in the developing world have often blocked their progress. Young girls are rarely allowed to complete their education before beginning work or families, and as a result, two-thirds of the world's illiterate are women [source: UN]. Rates of death in childbirth are high because men won't spare the money to get a doctor for their wives, even though their wives are the ones working in the fields, cultivating more than half of all the food that is grown in the world [source: Shah].

The key to reversing these trends is education for women. Research shows that an educated woman marries later, gives birth later and is more likely to seek medical care during childbirth. Education has been linked with lower rates of HIV/AIDS transmission and, most notably, it creates financial and occupational opportunity for women. The success of microloan institutions such as Kiva rests on the shoulders of women in the developing world, who are more likely to use their income to invest in their children's education than the men of the family are. Men in these countries speak of being impressed that women can bring home the bacon, for they've been taught for so long that only men can [source: Kristof, WuDunn].

While education will remain a key goal for the developing world, the path to gender equality is a bit trickier to elucidate in wealthier countries. A 2010 survey conducted in 22 countries by the Pew Research Center found that support for equal rights for women in education, in the workplace and in marriage exists worldwide, yet even some of the most developed countries believed they had not yet achieved this equity [source: Pew Research Center]. While women in the developed world don't have to worry about being attacked with acid as they walk to school (a problem in the Middle East), working women must wonder if they've hit a proverbial glass ceiling when they watch men walk away with the promotions and the bigger salaries.

These women may want to look to Scandinavia. Norway, Finland and Sweden regularly top lists that rank the countries on gender equality. These countries have found ways to support women's rights and women's choices without penalizing men. For example, Norway offers extensive paid maternity leave as well as at least 10 weeks of paternity leave. Once parents return to work, there is an extensive day care system available. Norway employs a Gender Equality Ombud who is charged with monitoring fairness and combating discrimination; one ombud in 2006 threatened to shut down companies that didn't have female representation on their boards [source: Fouche, Treanor]. While a system of quotas has been frowned upon in other parts of the world, one way to create equality is simply by demonstrating that a woman can do a given job competently. Seeing women in these leadership roles helps break down the idea that women can't do certain things, which is one of the main barriers to equality, even in the developed world.