How to Become a Drag Queen 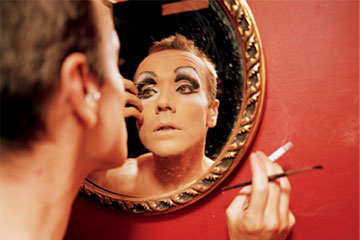 For vaudeville-turned-silent-film star Julian Eltinge, perfecting his female impersonator appearance before stepping foot on stage was an arduous process. In a 1913 article published in Theater Magazine, Eltinge described making himself over and how his hands -- as opposed to his face, as one might assume -- provoked the most anxiety as he strived for feminine authenticity. As a result, he would spend an hour and a half before curtain call painstakingly painting and powdering his hands and consider their positioning constantly throughout his performance, as he wrote in Theater Magazine: "The size of the hands can apparently be decreased by the way in which they are held, and any woman with a little practice can perfect herself in this graceful treatment" [source: Eltinge].

Quality drag entertainment requires a comparable amount of preparation today, as one of the most famous moments in drag history attests. In the 1970s, a San Francisco drag collective called the Cockettes put on such a lackluster show at their New York debut that Gore Vidal skewered them with the pithy review, "no talent is not enough" [source: Valdespino]. Perhaps drag queens took notice, since the makeover process not only takes time and money, but also an inside-out embodiment of a crowd-pleasing character.

A close shave is a basic first step to dressing, since stubble will ruin a lady-for-the-night's looks. This is followed by a think application of full-coverage foundation to even out skin tone [source: Logo TV]. Drag queens typically wear exaggerated amounts of cosmetics to shape and soften masculine jaw lines and musculature and emphasize their larger-than-life personas; accessories like false eyelashes and wigs help complete their above-the-neck look. In drag speak, "beating one's face" or "beating one's mug" is code for slathering on the right amount of cosmetics [source: Etkin]. Before getting dressed, male performers must tuck, tape or use a cloth device called a gaff to hide their genitals from view in tight-fitting costumes [source: Logo TV]. To enhance their décolletage, drag queens may also choose from a variety of breast forms that either attach directly to their chests or fit inside bra cups. Silicon breast forms, which tend to look the most realistic and conform to a person's body temperature to keep them in place, can cost hundreds of dollars, depending on the size and quality [source: Drag-Queen.com].

Wardrobe and cosmetics styling will depend on the overall look a drag queen is going for. Fishy drag, for example, aims to look as womanly as possible, as opposed to camp drag that humorously maintains a manly look in a dress [source: Etkin]. Glamour drag plays up the beauty pageant angle with big hair, sparkly gowns and plenty of jewelry. No matter the category of drag, superstar RuPaul maintains that the ultimate message should be "don't take life too seriously" [source: Fernandez].

Once done up, drag queens remain mindful of posture, stride and vocal inflections to continually project effeminacy. And all of it, from the wig to the posture, serve to complement a new identity, via quirky drag queen monikers such as Lady Bunny, Coco Peru and Hedda Lettuce.

Drag queens serve different purposes depending on the type of event they work. They may, for instance, be employed as party promoters, milling through crowds and ensuring that guests are having a good time. Drag revues are more theatrical affairs that generally feature lip-synched song and dance routines performed by drag queens for cash tips. Higher profile drag queens may also be called on to emcee fundraisers or other soirees. And while they may bring in some extra pocket money in drag, most typically pursue it as part-time work due to late-night hours and minimal compensation; in a study of drag queens in Key West, Fla., for example, most made less than $200 per week [source: Taylor and Rupp]. But for a lucky, bewigged minority, it's possible to make it big in drag.

Is Australia a Drag Queen Haven?

Australia has been lauded as a haven for drag queen culture, most likely stemming from the 1994 Aussie film "The Adventures of Priscilla Queen of the Desert" featuring a group of drag queens making their way through the outback [source: Fuss]. In 2012, an Australian television company began filming a reality program documenting 10 drag queens' travels along the same path covered in the cult film.