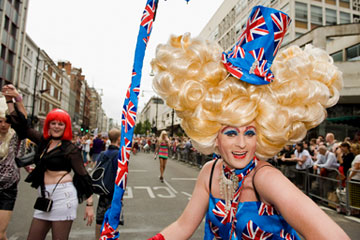 By one estimate cited in the seminal book on early drag queen culture, "Mother Camp," the United States was home to about 500 regularly performing drag queens by July 1966 [source: Newton]. That was also the same year stage legend Jim Bailey first wowed audiences with his spot-on embodiment of Judy Garland, but Bailey would balk at being lumped in with a drag queen headcount [source: Petrucelli]. Although Bailey attracted an impressive following for his spot-on imitations of female Hollywood icons for more than 40 years, his preference for being labeled an illusionist and not a drag queen speaks to the nuances of cross-dressing terminology.

The term "drag queen" comes from a mash-up of "drag," which has existed in theater parlance for centuries to refer to men dressing in women's clothing, and "queen," an anti-slang word for an effeminate gay man. And while drag queens today are associated with gay populations, not all men who have performed drag are gay; often, these are entertainers like Bailey who prefer phrasing like "female impersonator" or "illusionist" to describe their craft. Drag queens who wear female clothing and makeup only during performances but identify as male offstage may also be mistakenly labeled transsexual or as a transvestite, an older term that's dropped out of favor today because of its past association with homosexuality and cross-dressing as mental pathologies. That said, transgender and transsexual people who present on and offstage as different genders or biological sexes may perform drag as well.

Cross-dressing and drag performances existed as an underground culture for much of the 20th century, and the visibility of drag queens increased alongside that of LGBT communities in the late 1960s. When the infamous Stonewall riots occurred in 1969 at New York's Mafia-run Stonewall Inn, one of the city's only gay bars at the time, homosexual acts were illegal in every state but Illinois [source: American Experience]. On June 28, New York City police officers raided the bar seeking to arrest homosexual patrons en flagrante, and when the crowd decided to fight back instead of capitulate, high heel-wearing drag queens and transsexuals were on the frontlines of the six-day skirmish that officially signaled the start of the gay rights movement in the United States.

Even in the face of legal repression and social ostracism, drag queen communities began to organize more formally in the mid-1960s. In response to the police shutting down a string of gay bars, José Julio Sarria, San Francisco's first openly gay political candidate and local performer, founded the Imperial Court System that united the drag queen and gay community at large for annual drag balls and other events [source: Imperial Court System]. Chapters now exist in cities across the United States, Canada and Mexico and largely serve as philanthropic organizations that help support HIV and AIDS prevention and research.

Drag balls also have become cornerstone fêtes within African-American drag queen communities. Similar to a fraternity system, up-and-coming drag queens can join up with local houses headed by older, experienced house "mothers" or "fathers," who help groom young members in their drag pursuits and offer moral and social support along with shelter if they've been kicked out of their homes. Periodically, drag queens and kings from various houses will face off at balls that feature walk-offs between contestants competing in categories such as Femme Queen Impersonation and Male Face [source: Trebay]. Jenny Livingston famously captured Harlem's African-American ball culture in her 1990 documentary "Paris Is Burning," which also offered an intimate glimpse into what it takes to transform into a drag queen for a night.

The history of drag kings -- or male impersonators -- isn't quite as extensive as its drag queen counterpart. The practice took off in the early 1990s and is largely attributed to New York performance artist and transsexual Johnny Science [source: Torr and Bottoms]. At the time, Science was organizing drag king workshops to teach attendees about masculine costuming and makeup; Science also is thought to have coined the term "drag king."