An Early History of Cross-dressing and Drag 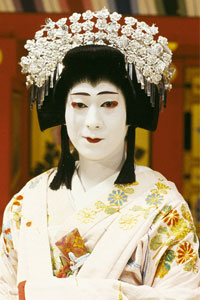 The history of men playing female roles on stage stretches back millennia. In ancient Greece, women were barred from participating in dramatic performances because it was deemed too dangerous. During the Middle Ages in Europe, the Christian Church continued the tradition of banning women on stage as a moralistic precaution to preserve their sexual propriety. At that time, theater existed only in the form of church pageants that reenacted Biblical stories, and it wasn't until the 17th century that opera first opened up stage roles for women [source: Gerwitz]. During Shakespeare's heyday in England, men would play both male and female roles, and in 1660, King Charles II lifted the curtain on gender restrictions on stage, at last allowing women to play themselves. Over the next few decades, it even became popular for women to portray male characters, in a conceit called "breeches roles" [source: Torr and Bottoms].

Incidentally, the loosening of gender restrictions in Western theater took place as stage rules tightened in the East. In 1629, Japan instituted a ban on female actors, specifically targeting all-female kabuki troupes. Through the 19th century, male actors would have to serve as onnagata, or female impersonators, in kabuki productions [source: Morinaga].

Back in Britain, although men were no longer required to play female characters, they still carried out the custom at times, only for comedic rather than dramatic effect. And instead of men attempting to looking convincingly like women on stage, a British theater genre called pantomime evolved around masculine-looking actors feigning effeminacy for laughs, while a female actor played a young male protagonist [source: The British Players]. The first pantomime -- also known as panto -- play opened in 1723, and the gender-bending tradition of men costumed in women's garb, wigs and excessive makeup to lampoon stereotypes of older, sexually knowledgeable, women took off and would later inform vaudeville acts across the pond.

Before the rise of urban centers and movie theaters in the United States, traveling vaudeville shows were one of the most popular forms of family-friendly entertainment from 1870 to 1920. Alongside kooky acts such as ventriloquists and amateur acrobats, pantomimelike drag performances were also popular and considered safe for audiences of all ages. Although these early drag entertainers intended to mock rather than emulate their put-on heroines, the campiness of their routines would endure into contemporary "glamour drag" shows that involve more direct female impersonation.

At the turn of the century, homophobic anxieties over men dressing up as women didn't stoke much public complaint, but as gay men gradually came out of the closet, drag became more closely linked with homosexuality and transitioned to more of an underground art form. As a byproduct of Prohibition and the rise of illegal speakeasies in the 1920s and early 1930s, gay men also found new places to congregate away from the prying eyes of the law. Larger U.S. cities like Chicago and New York experienced a so-called "pansy craze," and more bars catering exclusively to gay clientele, along with bawdy drag performances, sprang up [source: Valenzuela].

By the 1950s, police had begun cracking down on gay-friendly establishments and enforcing anti-cross-dressing laws; in New York, for instance, men were legally obligated to wear no fewer than three pieces of male clothing in order to not be arrested for drag [source: American Experience]. Amid intensifying anti-gay hostility, in 1965, the Imperial Court System was founded as the first drag queen organization, and that kind of community building among drag queens would ultimately prove to be a valuable resource within the broader gay community that had begun making itself more publicly known.

Did a drag queen inspire Mae West's most famous line?

Hollywood legend Mae West allegedly borrowed her onscreen vampy poise and persona from a vaudevillian drag queen. Bert Savoy, born Everett McKenzie, sent early 20th-century audiences on the vaudeville circuit into stitches with his campy portrayals of gossipy, salty-tongued women. His drag queen characters often recycled familiar phrases, including "you must come over," which is thought to have inspired West's famous and oft-misquoted line, "come up sometime and see me," in the 1933 comedy "She Done Him Wrong" [source: Slide].