Why Democrats Are Donkeys and Republicans Are Elephants

Browse the article Why Democrats Are Donkeys and Republicans Are Elephants 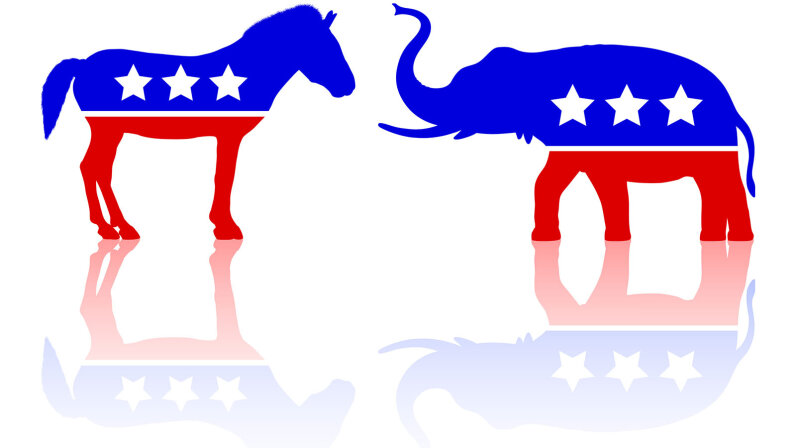 How did the donkey and elephant end up as the symbols of the two major U.S. political parties? Leontura/Getty Images

When the Democratic Party gathered for its 2008 convention in Denver, Colorado, a live donkey named Mordecai was there to serve as the first official live mascot in the history of the Democratic Party. The "official 'asscot," as his owner Curtis Imrie called him, didn't deliver a memorable address to the party like Barack Obama did. But his presence provided a light-hearted moment at the Democratic National Convention (DNC).

The Republican Party, however, has never had a live elephant at one of its conventions. But a donkey being at the 2008 DNC raises a question. Where did these two symbols come from? Why do the Democrats choose to affiliate themselves with an oft-ridiculed member of the horse family? And how did the Republicans come to be represented by an ivory-tusked pachyderm?

The origins of these two iconic political symbols were created by noted German-born political cartoonist Thomas Nast, whose drawings also helped create modern images of Uncle Sam and Santa Claus. Nast moved to New York City when he was 6 years old and displayed artistic ability at an early age.

Nast joined the staff of Harper's Weekly in 1862. By the time he left in 1886, he had not only stamped the elephant and donkey as political party symbols, he'd also become one of the most influential cartoonists in American history. By the time he used the donkey as a Democratic Party symbol, Nast was already a household name. He had ascended to fame with cartoons that confronted the Civil War, Reconstruction, immigration and the Tammany Hall political machine, eventually helping bring down the Boss Tweed ring. 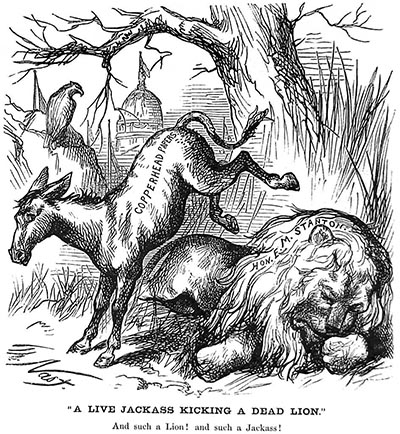 To understand the origin of the donkey as a symbol for the Democratic Party, you need to know a little about the politics of Thomas Nast's time. First, Republican and Democrat meant very different things in the 19th century than they do today (see sidebar). Nast despised a group of Northern Democrats known as "Copperheads." Copperheads opposed the Civil War from the start, and Nast thought of them as anti-Union racists who had become far too prominent and influential in the North.

In his first cartoon featuring the donkey, which was published Jan. 15, 1870, Nast drew a donkey kicking a dead lion. He branded the donkey as the Copperhead Press and the lion as Edwin M. Stanton, Abraham Lincoln's secretary of war, who had just died. The cartoon was an unflattering take on a Democratic press whose lingering anti-war beliefs dishonored Stanton in Nast's mind. He articulated with this simple drawing his belief that the Copperheads were dishonoring the legacy of Lincoln's administration. Using a donkey — or jackass — was an obvious way to belittle the Democrats.

Nast continued to use the donkey as a symbol for Democratic organizations. He next used its image in an 1874 cartoon reacting to Democratic cries of Caesarism against Republican President Ulysses S. Grant. Grant was thought to be seeking a third term in office, and Democrats compared him to Julius Caesar, painting him as a greedy dictator trying to wield imperial power. Nast disagreed with these accusations.

In his Nov. 7, 1874 cartoon, titled "Third Term Panic," he illustrated the Democratic press, specifically the New York Herald, as a donkey dressed in lion's skin. The donkey, labeled Caesarism, was scaring other animals off into chaos. The cartoon represented what Nast felt were fear mongering Democratic media; they appeared as a ferocious predator but were actually foolish and harmless in their panic. Included among the animals is a huge, bumbling elephant labeled "the Republican Vote."

The cartoonist's continued use of the symbol included an 1879 cartoon in which a leading Democratic presidential candidate was grabbing a donkey labeled "Democratic Party" by the tail. The candidate was trying to prevent the donkey from hurtling into a pit labeled "financial chaos." This was a commentary on the gold standard and inflation on the eve of the 1880 election. By the 1880s, Nast's use of the donkey had made it a national symbol for Democrats, although the Democratic Party never adopted the animal as its symbol.

In the cartoon in which a politician had the Democratic donkey by the tail, Nast's other famous political symbol, the Republican elephant, lies wounded and sluggish in the background. While the Democratic donkey was generally the symbol of a party of braying fools in Nast's eyes, the Republican elephant was another story. It symbolized a party that had departed from its roots in social liberalism, which Nast favored.

If Thomas Nast favored social liberalism, why was he a Republican? Nast was a Republican before the two parties shifted in their philosophies. So how did the parties flip-flop? The history of each party is complex, and the shift was gradual, but the election of Franklin D. Roosevelt as a Democratic president was one turning point. Roosevelt's liberal New Deal policies as a Democrat made many in the Republican Party become Democrats. By contrast, it also sparked many Southern conservatives to start voting Republican. 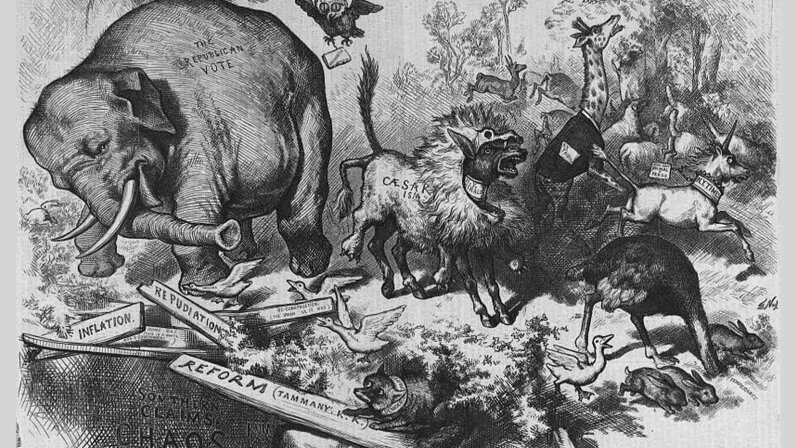 Nast's famous "Third Term Panic" cartoon was his first use of an elephant to represent the Republican Party. A donkey in lion's skin (center) scares off other animals, among them is the elephant representing the Republican vote. Library of Congress

Just like the donkey, the elephant became a popular symbol through the political cartoons of Thomas Nast. But Nast had different feelings toward the elephant — it represented the party he'd idolized since his emergence on the New York political scene. Behind his renderings lay strong, Republican convictions. But Nast became frustrated with Republicans in the 1870s, when he felt the party had strayed from social liberalism. That frustration, in part, would spawn the Republican elephant image.

The elephant had been used twice before as a political symbol, once in a piece of 1864 Lincoln campaign literature and again in 1872 by Harper's. Nast's first use appeared in the same 1874 "Third Term Panic" cartoon that featured a disguised donkey chasing frightened animals. An elephant bearing the title of "Republican Vote" bounded clumsily toward a pit labeled "inflation" and "chaos." The elephant represented the effects of Copperhead Democrat scare tactics, as well as the confused behemoth that Nast felt many Republican voters and publications had become.

Nast introduced the donkey and the elephant as national political symbols, but there is no definitive answer as to why they remain so popular so many decades later. Perhaps the best explanation is the influence of Nast himself. He was a rare political cartoonist whose work influenced the politics of his era. Proof of this lies in the words of famous men of the times. Lincoln called Nast his "best recruiting sergeant" for the 1864 reelection campaign. Grant had similar feelings on his 1868 election, heaping praise on "the pencil of Nast." Mark Twain said that Nast had "won a prodigious victory for Grant — I mean, for civilization and progress."