The Diamond Heist: Months in the Planning 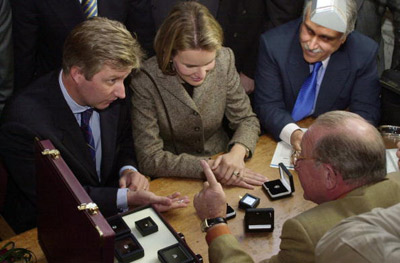 Belgian Princess Mathilde (C) and Prince Philippe (L) speak with a man at Antwerp's Diamond Market, considered to be the largest trading point for rough and cut diamonds in the world.
Paul O'Driscoll/Getty Images

Real-world diamond heists are surprisingly like the heists we see in the movies. And they're not nearly as rare as you might think.

The largest diamond heist ever went down in Antwerp, Belgium -- one of the world's diam­ond capitals. The Antwerp Diamond Center building houses 160 vaults in which diamond brokers leave their stones. In February 2003, 123 of those vaults were emptied of their contents by four people who had been planning the theft for at least two years. They rented office space in the building, analyzed the alarm system and learned how to bypass it, stole keys to the vault and made copies. On the day of the break-in, they recorded over all of the security cameras. They were later caught by Antwerp police, but the $100 million worth of diamonds and other gems they stole have never been found.

It's an impressive heist, no doubt. So what can top a $100 million diamond theft that bypassed one of the world's most comprehensive security systems and took two years of meticulous planning? One that didn't have to bypass security at all.

Diamond heists happen at least every few years. After all, diamonds are small, lightweight, valuable, and police dogs aren't going to smell them out at the airport. For the same reason, diamonds are protected by the best security systems available -- infrared sensors, "unbreakable" safes, guards with guns and phones that open a direct line to the police when they're lifted off the receiver. Antwerp even has special police patrolling the diamond center. But sometimes, the security doesn't help, especially when the thief is given keys to the vault.

No one knows his real name, but people at the ABN Amro bank in Antwerp's diamond center knew him as Carlos Hector Flomenbaum, a successful businessman who'd been frequenting the bank for at least a year. The bank's employees loved the guy. He brought them chocolates, chatted them up and was generally a friendly, charming and honest guy. At the diamond center's ABN Amro, trusted, top customers are given keys to the vault so they can access their diamonds at odd hours. "Flomenbaum" became one of these trusted key holders. Sometime between March 2 and March 5, 2007, he walked out of the bank with 120,000 carats of diamonds worth about $28 million.

The ABN Amro bank has a $2 million security system, but "Flomenbaum" never had to deal with it. He used his passcard to get into the vault, went straight for the area that housed uncut diamonds, and emptied five of the deposit boxes. Some experts said the bank shouldn't have had multiple security deposit boxes in an area that could be accessed by a single box holder with a keycard. Each person should only be able to get to his or her own box.

The Antwerp diamond district is obviously a major target, but there are others. In 2002, thieves got into a museum in The Hague that was hosting a diamond exhibit and left with millions of dollars worth of stones. No one knows how they did it, seeing as the exhibit had sensors and security cameras running 24 hours a day.

But the perfect crime often falls to pieces when thieves try to unload their stolen gems. That's how the not-so-graceful diamond theft in 1959 ended. When one of the thieves tried to sell Vera Krupp's 33-carat diamond, the FBI knew about it immediately.­