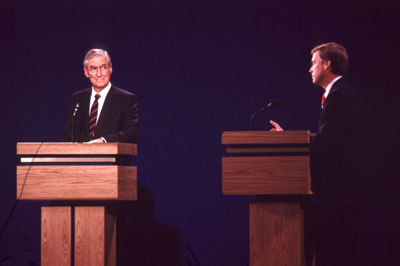 Presidential debates since 1988 may be rigged to serve the two-party system, but the winner isn't predetermined. Debates are meant to be about candidates' views on the issues, and no response is incorrect. So if there's no right or wrong answers in a debate, how can one candidate emerge a winner?

The results of debates are all about perception. There's the perception of the national news anchors who serve as commentators, who lead viewers in by telling them what to expect. Then they lead viewers out of the debate by dissecting what was just said. There's the perception of the media who write about the debate. What commentators and reporters choose to discuss can help shape the minds of the voting public -- the group whose opinion matters the most in determining the winner of a debate.

Sometimes, the candidates make it obvious who's lost. Pres. George H.W. Bush made it an easy call when he checked his watch several times during a town hall debate in the 1992 election [source: CNN]. In the 2004 debates between Sen. John Kerry and Pres. George W. Bush, the television networks ignored the memorandum of understanding and filmed reaction shots. They caught Bush looking annoyed during breakaway shots, which occur when the camera switches from the candidate speaking to the one who's not [source: AP].

The winner of a debate can become equally clear -- sometimes just through a mere turn of phrase. When Sen. Dan Quayle compared himself to Pres. John F. Kennedy in a 1988 vice-presidential debate, Sen. Lloyd Bentsen pounced on him. "I knew Jack Kennedy. Jack Kennedy was a friend of mine," Bentsen said. "Senator, you're no Jack Kennedy" [source: Yale]. When Ronald Reagan's age became an issue of discussion in a 1984 debate, he turned the tables, saying, "I want you to know that also I will not make age an issue of this campaign. I am not going to exploit, for political purposes, my opponent's youth and inexperience."

Ultimately, what matters is who the public thinks won a debate. Polling companies have made an industry of keeping track of what voters think. As soon as a debate ends, polling companies and media agencies have employees on the phone calling registered voters to ask them what they thought of the debate. Within hours, polls are released and the winners are clear. The results can come more quickly through snap polling, where voters go to the pollsters via the Internet or some other aspect of new media.

The veracity of post-debate polls in accurately pinning down voter sentiment can be hit-or-miss. In 1988 and 1992, polls missed the mark by declaring as winners the same candidates who were defeated on Election Day [source: Abramowitz]. And while polls almost across the board showed Kerry as the winner of the three presidential debates in 2004, George W. Bush won re-election [source: CNN]. Snap polls are often contested since they require a level of tech-savvy and therefore represent younger segments of the voting population rather than the voting public as a whole. The very presence of polls can also affect voter sentiment. Polls released showing a clear winner from a debate can affect the perception of the outcome of a debate, influencing voter perception.

The advent of snap polls has inspired a resurgence of technology in presidential debates. For the first time since 1960, technology would begin to play a major role in shaping the political process in the 2008 election.