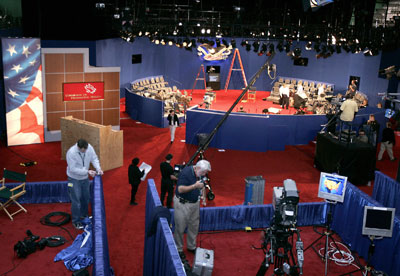 Debates, like this one in 2004, take time to set up. Time and a neutral location aren't the only factors involved in ensuring fairness. Things like podium height and seating arrangements are also carefully crafted.
Jeff Haynes/AFP/Getty Images

Spontaneity is perhaps the most important factor in a debate. Without spontaneous responses culled through follow-up questions, debates are nothing more than well-rehearsed press releases spouted off by the candidates on television. Debates are also meant to be nonpartisan. An ideal debate should be open to all candidates who qualify, and the format should be fair to all candidates participating [source: LWV]. This makes neutrality, the division of time, the moderation and the type of format chosen of vital importance to presidential debates.

Selecting a neutral site for a debate can be difficult. No location can be selected in a candidate's home state or hometown. Since presidential debates are often held at colleges and universities, any of the candidates' alma maters are out. Most tiny towns are out of the running: The Commission on Presidential Debates' (CPD) minimum requirements, like at least 3,000 available hotel rooms and the $7,500 application fee, generally ensure small towns won't land a debate. The prestige associated with hosting a debate is such that even places passed over in favor of others still gush over having been considered.

A fair division of time among the candidates is tradition in debates. Candidates are provided with an equal amount of time to give opening and closing statements about the issues and what the audience has heard during the debate. It's the time in between that can be divided in different ways. In some cases, time may be evenly split strictly through allowing candidates an allotted amount of time to respond to questions. Other formats allow for rebuttals, especially when an issue is slanted toward one candidate or another. The rarest division of time allows candidates to cross-examine one another on an issue [source: LWV].

There are a few established formats for debates. Under the moderator format, a debate is hosted by a single person, usually a television journalist, who poses questions to the candidates, directs them to rebut and manages response times. In the panelist format, the single moderator is replaced with several people. This format can also feature a moderator. A town hall meeting format has members of the audience ask questions. This format is meant to create the most relaxed and spontaneous atmosphere of the three types.

To qualify for a debate, a candidate has to have a statistically feasible chance of being able to win a majority of the votes available in the Electoral College. The formula for determining this chance is based on the number of states with ballots on which the candidate's name appears -- the number of states a candidate could win simply by appearing on the ballot. The candidate also must have at least 15 percent of voters' support in polls before the debates begin [source: AP].

A ruling by the Federal Communications Commission (FCC) would allow even qualified candidates to be excluded from debates. This one change to the equal time provision of the Communications Act also ended the days when a candidate could kill a debate simply by refusing to show up. It also allowed the League of Women Voters (LWV) to step in as host, what would prove to be a short-lived heyday for presidential debates.