Presidential Debates under the League of Women Voters 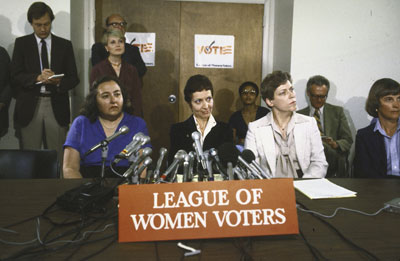 Senior members of the League of Women Voters issue invitations to the presidential candidates during a press conference in 1980.
Diana Walker/Time & Life Pictures/Getty Images

The League of Women Voters (LWV) was an organization born immediately after the 19th Amendment made the women's suffrage movement obsolete. Now granted the right to vote, the suffrage movement looked to encourage women to "use their new power to participate in shaping public policy" [source: LWV]. In 1975, the coalition used its power to become the hosts of the 1976 presidential debates.

This was not new for the league; in 1952 it hosted the first nationally-televised debate in U.S. history. It differed from the televised Kennedy-Nixon debate in 1960 in that all candidates from both parties were present instead of just the two nominated candidates. The league remained out of the arena of debates until the Federal Communications Commission (FCC) amended the equal time provision, declaring presidential debates "bona fide news events," which, if hosted by a third party, exempted debates from the equal time provision [source: CNN].

The LWV stepped in as the third party needed for this new regulation and hosted presidential debates from 1976 to '84. The LWV codified the formats of presidential debates, splitting them into categories based on how questions are asked. The league used an open format, allowing follow-up questions among candidates. These types of questions are difficult to prepare for before a debate -- they're unpredictable.

The league ran a tight ship from 1976 to '88. As a nonpartisan organization, it was ardent in affording equal time to all candidates. The organization was also the keeper of the format, the questions and the debate in general. It served as host, and the candidates were invited to participate or not; the debate would go on without them. The LWV's refusal to acquiesce to candidates' demands made presidential debates a powerful force in U.S. politics. When Jimmy Carter refused to debate with both Republican nominee Ronald Reagan and independent candidate John Anderson in 1980, the LWV held the debate without Carter. Reagan went on to win the election, and his performance at the debates without Carter to contend with was one factor in his win [source: PBS].

This made presidential debates dangerous, and not just to Democrats like Carter. In a given election cycle, candidates from any party could face humiliation, the loss of a lead in the polls and defeat, all because of a single debate. So the two major parties in the United States came together to wrestle control of presidential debates from the League of Women Voters.