The Invasion of Tibet 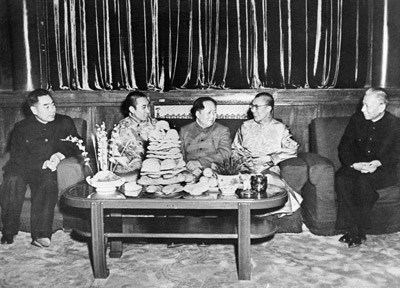 In 1956, the Dalai Lama (second from right) met with Mao Zedong (center), chairman of the People's Republic of China, in an attempt to establish diplomatic relations.
AFP/Getty Images

Over the next 10 years, the Dalai Lama pursued a monastic education directed toward a doctorate in Buddhist studies. He learned Buddhist philosophy, logic, Tibetan art and culture, Sanskrit, medicine, music, drama, phrasing, poetry, astrology and synonyms.

The Dalai Lama's scholarly education was also supplemented with intense lessons in foreign relations. By the late 1940s, China's position on Tibet had become increasingly aggressive. The People's Liberation Army was encroaching on the independent country's borders in the name of liberating its people from imperialists.

With the looming threat of Chinese military action, Tibetans thought it was time for the Dalai Lama to assume political power. On Nov. 17, 1950, Tenzin Gyatso was enthroned at the Norbulingka Palace -- he was only 16 years old. After appointing a monk and lay prime ministers, he and his advisors decided to send delegations to the United States, the United Kingdom and Nepal to win allies in the struggle with China. A fourth delegation would be sent to China to dissuade the country from staging an invasion.

The first three delegations returned without success -- Tibet and the Dalai Lama would apparently have no allies. The fourth delegation was received in China but was soon forced into one-sided negotiations with the powerful military country. As the Dalai Lama listened to the radio one evening, he heard a shocking announcement: His representatives from Tibet had signed a document called the Seventeen-Point Agreement under pressure. The agreement allowed the People's Republic of China to "liberate" Tibet.

Unable to resist the unauthorized agreement, the Dalai Lama spent the next several years trying to bar China from outright takeover and placate Tibetan resistance fighters from entering a lopsided fight. But by 1959, the situation had worsened. The Dalai Lama received an ominous invitation from a Chinese general to attend a dance performance, under the condition that he would bring no soldiers - only unarmed guards. Fearing for their leader's safety, tens of thousands of Tibetans began to congregate in Lhasa at his palace. A consultation with the oracle advised that the Dalai Lama should leave the country immediately. On the night of March 17, 1959, he disguised himself as a soldier, shouldered a gun and fled with a small escort through the throngs of his people.

The Dalai Lama's harrowing escape eventually brought him to Dharamsala, India. In the next section, we'll learn about the Dalai Lama and the Tibetan government in exile.