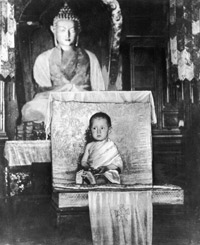 After the death of the 13th Dalai Lama, the Tibetan government began searching for his reincarnation, using mystical clues as guides. Because the head of Thupten Gyatso's embalmed body had rotated while it lay in state, turning from the south to the northeast, the government suspected that the future ruler would be found in that region of Tibet. Soon afterward, the Regent Reting Rinpoche had a vision of the sacred lake Lhamo Lhatso reflecting the Tibetan letters Ah, Ka and Ma. He interpreted "Ah" as a sign for Amdo, a northeastern province of Tibet. The Regent's vision of the lake was followed by one of a three-story monastery with a roof of turquoise and gold. Near the monastery was a tiny house with elaborate gutters.

Following the Regent's vision, a search party departed for Amdo, and decided that the letter "Ka" likely referred to the monastery at Kumbum -- a turquoise and gold-roofed structure. When the party came across a house with gutters made from juniper, they suspected they were close to their future ruler. They disguised themselves as travelers and stayed the night with the family to observe their 3-year-old son, Lhamo Thondup.

Lhamo had been born July. 6, 1935, to poor farmers in a struggling town. His infancy was normal, but he did exhibit some telling signs. Upon Lhamo's birth, his father made a sudden recovery from a severe illness. As a toddler, Lhamo demanded that he take his father's seat at the head of the table and would allow only his mother to handle his bowl. And perhaps most surprisingly, the young Lhamo seemed obsessed with Lhasa, Tibet's traditional and spiritual capital. He would pack bags, pretend to travel on horseback and exclaim, "I'm going to Lhasa" [source: Dalai Lama]. For the most part, Lhamo's family took no notice of the child's eccentricities. An older son had already been recognized as the manifestation of a high lama, and the family suspected they had reached a quota for prestigious reincarnations.

But when the disguised search party arrived at the house, its leader, Kewtsang Rinpoche, was confident that this was the right child. Lhamo immediately recognized Kewtsang Rinpoche as a monk and even knew from which monastery he came. When the members of the search party returned for a formal visit some days later, they brought several of the 13th Dalai Lama's possessions along with a set of decoy items. Lhamo correctly identified every item belonging to his predecessor with the proprietary statement "It's mine" [source: Dalai Lama].

The toddler was soon sent to the Kumbum monastery and eventually to Lhasa, where he was reunited with his parents. In 1940, Lhamo became Tibet's spiritual leader and took the vows of a novice monk. Lhamo Thondup was now Jamphel Ngawang Lobsang Yeshe Tenzin Gyatso, the 14th Dalai Lama.

In the next section, we'll learn how the youthful 14th Dalai Lama assumed power in his country's most trying time.