History of the Dalai Lama 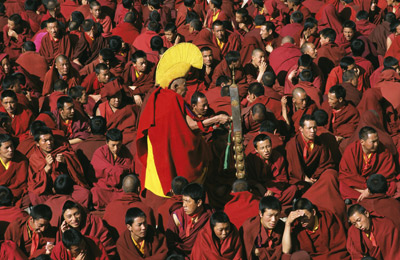 The Dalai Lama leads the Dge-lugs-pa or Yellow Hat Sect of Tibetan Buddhists. The Yellow Hats, who were founded in the late 14th century, restored discipline to monastic life and promoted academic rigor. They minimized the use of magical rites and imposed celibacy and abstinence from meat and alcohol. The Yellow Hats rose to predominance in the 17th century and helped bring about Tibet's unusually large monastic population. Until the Tibetan Uprising of 1959, about one quarter of the populace was in religious orders [source: Encyclopaedia Britannica].

The first Dalai Lama, Gedun Drupa, was born in 1391. He founded the Tashi Lhunpo monastery and wrote books on philosophy. Gedun Drupa and his successor Gedun Gyatso were officially abbots during their lifetimes -- the title of Dalai Lama was not adopted until the 1570s. The Mongolian king Altan Khan conferred the title, meaning "Ocean of Wisdom," on the third successor, Sonam Gyatso. Tibetans also use the name Rgyal-ba Rin-po-che or "Precious Conqueror" to refer to the Dalai Lama [source: Encyclopaedia Britannica].

After a string of four rulers who died in their youth, the 13th Dalai Lama, Thupten Gyatso, began to reform Tibet and reassert his position's political power at the beginning of the 20th century. He survived both British and Chinese invasions of Tibet, briefly living in exile in China and later India. During the Chinese Revolution from 1911 to 1912, he took advantage of the dying Manchu dynasty to expel its remaining forces from his country. Tibet became an independent country and remained so until the 1950s. The 13th Dalai Lama also bolstered his country's military, introduced currency and lightened some of the repressive aspects of monastic life.

By the 13th Dalai Lama's death in 1933, Tibet was on the path to modernization. In the next section, we'll learn how the Tibetan government found his successor.

The Dalai Lama through History