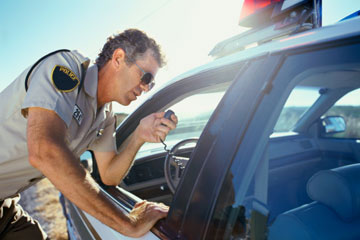 When you have a real-life encounter with a police officer, your perception of the experience might be colored by what you've seen on TV.
Stockbyte/Thinkstock

From Andy Taylor to Andy Sipowicz, television has been a popular beat for cops. Shows featuring law enforcement have been around almost as long as TV itself, and their enduring popularity has left indelible marks on the public conscience. For example, it's practically impossible not to whistle along with the theme song from "The Andy Griffith Show." And since "Hawaii Five-0" premiered in 1960, "book 'em, Danno" has become as iconic as any line uttered in the line of duty.

But has the popularity of these shows (according to tv.com, three of the top ten programs currently on TV are police dramas, a better representation than even bed-hopping doctors) affected how people view police? After all, these programs are, ideally, the only exposure average, law-abiding citizens have with law enforcement. What expectations, if any, do they set? And how can cops be smart enough to solve crimes in an hour and also be so good looking?

On average, Americans spend more than 4 hours in front of the TV every day, witnessing 200,000 dramatized acts of violence by the time they reach the age of 18 [source: Herr]. Before we discuss how these shows impact our perception of law enforcement, let's acknowledge that the inverse is also true: Our own sense of morality is parroted back to us through not only cop shows, but also virtually all content piped through the tube. The overriding theme in most programming is the triumph of good over evil [source: Curry]. Even reality shows cast participants to meet the stereotypes of hero and villain.

But cops shows are particularly dramatic, with violent crime getting top billing over less interesting but far more frequent transgressions like property damage, theft and fraud. This overrepresentation of violence on television has given rise to the mean world syndrome, which results when a steady stream of intense, violent and threatening programming creates an artificially heightened sense of danger [source: Curry].

This mentality affects our view of police officers by emphasizing their role of protector. And while this is of course their job, it's an unrealistic expectation to think we'll always be guarded from life's worst-case scenarios.

In the next section, we'll talk more about how cop shows can overinflate our expectations of law enforcement.

Another way cop shows are affecting our view of the police is by setting impossible standards. Most TV cops need about 40 minutes to solve a double homicide in which the perpetrator has left few clues. And they can usually do this without filing a single piece of paperwork or setting foot in a courtroom. Of course, this is not how the real world works, but if your knowledge of the justice system comes from television, then you may wonder why every case doesn't hinge on a fingerprint or a DNA sample.

Consider that in 2002, 64 percent of murder cases in the United States were solved. This represented the highest success rate among violent crimes , but a TV show in which the main character succeeded only slightly more than half the time would likely have trouble capturing an audience [source: Federal Bureau of Investigation].

One of the more popular trends in current cop shows is the science-based procedurals, such as "CSI," "Cold Case" and "Criminal Minds," that focus more on how science can help solve crimes. These programs provide a compelling, if dubious, insight into how forensics can help collar the bad guys. And these shows are wildly popular, spawning so many knockoffs and spin-offs it's hard to imagine getting away with anything in TV Land.

These shows have created what has become known as the CSI Effect, shifting the way people view law enforcement based on these hyperstylized shows. This is happening in three ways. First, the public is more knowledgeable about forensics, and juries are more capable (or at least think they are more capable) of understanding scientific testimony than they were before these shows inundated the airwaves. Second, juries expect an open-and-shut case from the prosecution because that's how it happens on TV. They have an expectation that their local police force can reproduce the sophisticated techniques of their favorite detectives; and if they can't, jurors are less likely to hand down a conviction. Finally, since jury members watch these TV cops hypothesize who committed the crime before any evidence is presented in court, it gives them the sense that they know how real cases will end. Obviously, for a juror, this represents a serious threat to justice [source: Ramsland].

So, the next time you're bathing in the television's warm glow, watching a suspect sing like a canary, remember that real-life cops don't have the advantage of script writers and make-up artists. Their job is to make crime entertaining and sexy, two things real crime is typically absent of.

The Right to Remain Irreverent

"Reno 911," Comedy Central's long-running and wildly inappropriate mockumentary following the incompetent (and fictitious) Reno Sherriff's Department, kept viewers cringing during its run from 2003 until it was cancelled in 2009. Though popular, it was never in danger of blurring the lines of reality.