by Kathryn Whitbourne
NEXT PAGE 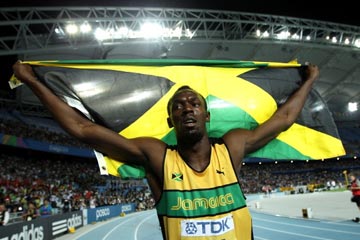 Sprinter Usain Bolt waves the Jamaican flag after winning the gold medal in the 200 meters at the IAAF World Championships in September 2011. Bolt, who holds the world records in the 100 and 200 meters, is considered "the fastest man alive."
Ian Walton/Getty Images

For an island of just 2.8 million people living on about 4,244 square miles (10,991 square kilometers), Jamaica is surprisingly well-known around the globe. It's sometimes called "The biggest little country in the world." Some people know Jamaica from having spent a holiday on its renowned white-sand beaches. Others have been captivated by reggae music, popularized by Jamaican artists like Marley and Peter Tosh. Or they've seen Jamaican Olympic gold medalist Usain Bolt, the "world's fastest man" on TV, blazing through various track events. They may have also seen news coverage pictures of crime and violence. Each of these is a part of Jamaica.

These are conflicting images: A laid-back, mellow, "no problem, man" society contrasted with an underbelly of aggression. Jamaica has one of the highest murder rates in the world. There were 1,428 murders in 2010 -- a decline from 1,682 in 2009 [source: Wignall]. Much of this is fueled by inner-city gang violence.

The poverty rate is also high, 20 percent in 2010 [source: Thame] while the 2010 unemployment rate was 13 percent [source: Jamaica Observer]. The combination of poverty and crime has fueled widespread emigration. In fact, an astounding 85 percent of college-educated Jamaicans have emigrated [source: Trading Economics]. There are probably as many Jamaicans living outside of Jamaica as there are on the island. And this has helped spread Jamaican culture abroad.

Despite these conflicting images, Jamaicans always go home to visit -- and tourists come in droves. All told, Jamaica is one of the most naturally beautiful places you'll ever see. It will get under your skin and you can't let go of it. That said, Jamaica is a study in contrasts and always will be.

The island's history may help explain why: Christopher Columbus "discovered" Jamaica in 1494. The island was originally populated by the Taino Indians, who were wiped out when Spain colonized it in the 1500s. In 1655, England captured the island and imported large numbers of African slaves to work the sugar plantations. After slavery was abolished, England imported Chinese and Indian indentured servants to the island. Jamaica won independence from England in 1962 [source: CIA World Factbook], but the racial melting pot that came from past colonization created an entirely new culture -- and a new set of cultural traditions.

We'll start by introducing you to some of these traditions firsthand, courtesy of the writer, who was born in Jamaica. Let's start with the holidays.