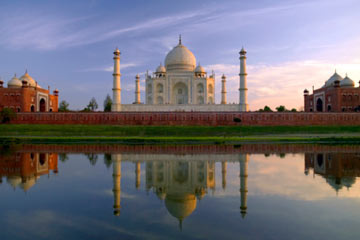 Architecture and the arts in India display a devotion to gods and goddesses, oral histories and storytelling, and romantic love. India is a virtual museum of architecture dating back thousands of years, and many of its most magnificent structures excel because of their detailed carvings and stonework, as well as intricate tiling, much of it handed down through artisans from generation to generation. A combination of figures and styles from Hindu and Islamic tradition decorates temples, public buildings and residences grand and small, and there are Buddhist shrines dating to the 2nd century [source: Encyclopaedia Britannica].

A contemporary Indian style also has developed in the cities and in the Western world and it borrows the arches and vibrant colors of the traditional and combines them with 21st century modern architecture and interior design. Feng shui, the art of using spirituality to determine placement of building elements like doors and windows, as well as furniture and décor, is an ancient practice that saw a revival and international popularity in the 20th century.

One of India's and the world's most well-known architectural masterpieces is the 17th-century Taj Majal, and although it is a traditional gem, it is really a singular and nontraditional monument because it was built as a memorial to a person and not a god. Emperor Shah Jahan spent about 20 years and a great deal of his wealth constructing the Taj Mahal, a classic in Muslim art designed to entomb and pay homage to the emperor's wife, who died giving birth to the couple's 14th child [sources: UNESCO; PBS].

About 1,000 movies are made in India each year, earning the center of filmmaking, Mumbai (or Bombay) the nickname "Bollywood" [source: Encyclopaedia Britannica]. Movies are shown throughout the country, from rural to urban areas and in many languages, but almost all have a similar look and story line with big name Indian stars, fantastic romances and elaborate song-and-dance numbers. Most of the films also borrow heavily from tradition and re-create epic scenes from history of mythology while adding contemporary characters and settings. Bollywood movies are some of the most recognizable forms of Indian entertainment in international filmmaking.

For a closer look at some of the traditions, tastes and beliefs of India, see the next page.