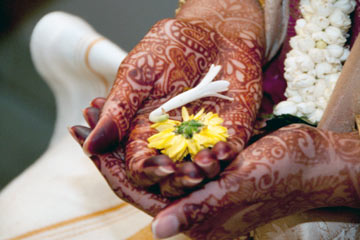 Intricate patterns of mehndi applied to a bride before a wedding.
Giorgio Majno/Getty Images

Faith, family and castes shape just about every aspect of Indian culture -- from birth to death -- and all the trials and parties in between. Indian society is structured around the families people are born into and where they are born. Individuals inherit their social position and stay within it throughout life.

A caste, or jati (meaning "birth"), is the level within the social system that determines who people will marry and often even what line of work they can pursue, where they can live and what they can eat. There are more than 2,000 jati and they fall within four recognized caste groups, or varnas:

A fifth, unofficial group, the Panchamas were historically called the "Untouchables" and in more recent years the Dalit or "Oppressed." About 17 percent of India's population belongs to this lowest of groups and performs farm labor or other manual work thought to pollute or sully higher castes in the system [source: Encyclopaedia Britannica].

In addition to being identified and included as part of a social caste, most Indians remain within family units that cross generations, from youngest to oldest, all living within the same housing quarters or complex. Men in a family line often stay with their birth families until their own fathers die and they start extended families of their own, while women will leave their homes once they marry and become part of another's extended family unit [source: Encyclopaedia Britannica].

Most females in India leave their families at a young age and a family's caste and location have a lot to do with when a girl will be married. In 1929, Indian law forbade marriages for girls under 12 years of age, allowing those 12 and over to become brides, but in 1978 the age limit by law became 18. With parental consent, however, many families follow their religious laws and cultural traditions and arrange marriages for girls before and after puberty [source: Lyn]. And while many in modern-day India embrace the practice of marrying for love and romance among two people, the most common practice is for the families to find mates for their children in an arranged marriage based on caste, religious beliefs and astrology.

Once a bride and groom are promised to one another (and often after a bridal dowry or financial exchange from the bride's family to the groom's takes place), a series of engagement parties, beauty rituals, and family meals and parties begins, leading up to a marriage celebration that lasts from three days to a week. Some couples approach an engagement and wedding never having met until they go home together after the ceremonies as husband and wife.

Marriages tend to last for life and the divorce rate in India is very low, estimated at under 10 percent (though that number is hard to verify), and some studies show that the rate is climbing. Men and women are strongly encouraged to stay together as part of their tradition and to work through any issues, even very serious ones, rather than separate or divorce [source: Giridharadas].