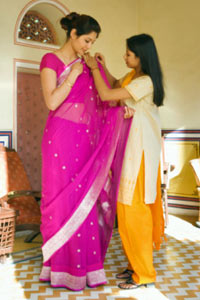 Women throughout India wear traditional saris made of cotton, silk or factory blends that are wrapped on the body in countless ways.
Jupiterimages/Getty Images

Men and women in India are draped and wrapped according to tradition, history and location. A dhoti or lungi, which is a loose skirt- or shorts-type wrap for men, is common in rural areas and in high heat, and most often it is worn alone, without a shirt. Women also wore these garments and went topless until Muslim conquerors overtook large parts of India in the 12th century and ordered women to cover their bodies and heads. In urban areas men often wear long, buttoned shirts and loose pants called Sherwanis or kurta pajamas.

Women throughout India wear traditional saris made of cotton, silk or factory blends and the 5 to 7 yards (4.57 to 6.4 meters) of fabric that make up a sari are wrapped on the body in countless ways depending on where the wearer lives. Hindu women wear short tops and slips or petticoat-type garments underneath and tuck the ends of fabric into waistbands. Other forms of wrapping leave cloth falling loosely over shoulders or covering the head. Salwar kameez, a pant and long-tailed or to-the-knees shirt outfit made of lightweight fabrics is most common for women in more urban areas.

Western clothing continues to increase in popularity in city centers, though the traditional bold colors and embroidery of classic Indian attire influence newer designs. With dhotis and saris dating back to the second century or earlier, and serving as a comfortable, cool and colorful feature of Indian clothing, they're likely to stick around for a while, too. One Indian style that crossed cultures and is a classic in Eastern and Western countries is the Nehru jacket, a well-tailored, high-collared, button-down style named after Jawaharlal Nehru, a former prime minister of India. Both men and women wear Nehru jackets.

Hair, jewelry and skin adornment complement the flowing and often textured and embellished clothing. Indian women groom long tresses with coconut oil, often growing their locks below the waist. Both men and women wear jewelry, including everything from toe rings to necklaces, and they adorn their foreheads with decorative bindi or dots, in red or black. These markings have significance in Hinduism and vary in shape and size depending on the occasion or social position of the wearer, and some non-Hindus wear them for decoration only.

Temporary henna tattoos, or mehndi body art, add body decoration to hands, feet and other body parts for ceremonies and festivals. Tonsuring, a rite-of-passage religious ceremony where boys and men have their heads' shaved, creates another look, though it is less about outward appearance and more of a show of devotion and faith [source: Encyclopaedia Britannica]. Girls and women also undergo tonsuring for religious reasons, though tonsuring a woman against her consent is a form of punishment or public humiliation.