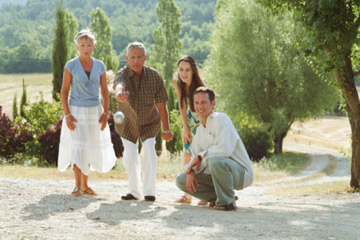 The French love a lively game of boules, or petanque.
Digital Vision/Thinkstock

Lest you get the wrong idea about the French, they're not all sitting in cafes all day, nibbling croissants and discussing the theory of life. There is also a varied and active sporting culture.

First off, French people do enjoy a stroll. Grand randonnees (or long distance trails around France) provide both urban and rural paths for walking and sightseeing. And leisurely jaunts around parks in cities also give the French the dose of sunshine they worship. (Just don't get off the path; it's not unusual to see signs warning visitors to keep off the grass in parks. The aesthetics of the outdoors is highly valued in France.)

If you do find a scrap of unwatched lawn, you might be interested in a game of boules, also known as Petanque. Two teams attempt to roll or throw balls closest to a jack in the middle, knocking their opponent's ball out of the way. You may know it in by its Italian name, bocce.

While organized rugby and soccer (le foot, en francais) are extremely popular national pastimes, the sporting event most decidedly "French" is the Tour de France. More than a hundred years old, the cycling race covers 2,235 miles (3,600 kilometers) over the course of three weeks. The grueling ride combines both flat, time-trial intervals with steep mountain climbs. But even though the race has become a proud French tradition, its beginnings were less exalted: A journalist started the race simply to draw attention and circulation to his newspaper, which sponsored the event.

One very recent tradition invented by the French deserves a mention. Parkour is a form of running (sometimes called "free running"), in which obstacles in the landscape are not avoided but quickly navigated with jumping, leaping, quick crawling and climbing. This non-competitive sport was invented by a French teenager in the late 80s [source: Lawrence]. Clearly, the sport requires serious skill, and you won't find the streets of Paris filled with Parkour practitioners on lunch break.

But Parkour does speak to the creativity and individualism embraced in French culture. Let's take a look at the next page to see how these traits have been regulated to keep French tradition "pure."