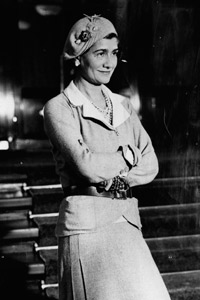 While a lot of foreigners imagine striped shirts, a knotted scarf and berets as a "traditional" French outfit, the reality is as varied as any other Western culture. Although regional clothing (like the headdress and embroidered dress of the Alsace region) is no more, fashion remains a tradition.

High fashion began in 1715, when ladies from the court gathered a group of tailors and designers, and plotted out new, custom-made fashions on the spot. Voilá: couture (garments made for a specific person) was created [source: DeJean].

Charles Worth, an American émigré, created haute couture (fashion houses) in the late 1800s by staging fashion shows and sewing labels into his pieces. By the 20th century, the bustle and corset disappeared, and French women took to loose-fitting undergarments and the sleek look of art deco infiltrated French fashion.

This paved the way for Coco Chanel's more austere and functional look, fitting for the period after World War I. Knockoffs became standard, and mass production began to take hold.

French fashion took a signature turn into an emergent art genre called "surrealism" (a movement marked by absurdity and juxtaposition) between the wars. Designers made hats that looked like shoes and evening dresses printed with not entirely elegant giant lobsters.

These bizarre (and not terribly utilitarian) looks continue in haute couture today. Lady Gaga, for one, should be grateful to the French for their foresight whenever she pulls her meat dress out of the hamper.

The beret illustrates how French fashion follows culture quite closely. Originally used by the sheep herding Basques of France and Spain, it was co-opted by intellectuals who embraced the common-man aesthetic of the hat. Soon, we all had to have one.

"Urbanization ruined everything," says Bernard Fargues, who makes berets in France, in an interview with The Telegraph. "At first when rural people moved into the cities, they carried on wearing the beret. And the intellectuals began to wear it as a symbol of solidarity ... But then people stopped wearing berets in the towns because it came to be seen as a sign of a provincial, a peasant. Beret wearing declined in proportion to the rural exodus" [source: Broughton].

As goes French culture, so goes French fashion. So let us put our beret away to don our thinking cap as we explore French literature and philosophy.