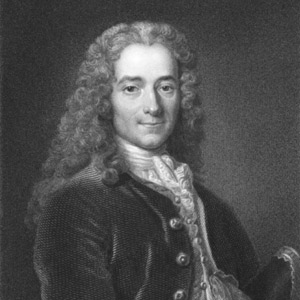 As Voltaire can attest, the French are some pretty philosophical folks!
iStockphoto/Thinkstock

Imagine an archive of that details every artistic and scientific advance, allowing us to keep track of how stuff works. Sound familiar?

Denis Diderot was a French philosopher and writer in the mid-18th century who used rationalism (a belief in reason) as a basis to compile an encyclopedia on arts and science. "Le Encyclopedie" was created to record all the essential tenets of scientific and artistic thought (Luckily for How Stuff Works, he never got it done completely, thus allowing for some young upstarts to take his place, 300 years later, and let the world know how exactly Muppets work).

Before rationalism was the 17th century Enlightenment, where thinkers like Michel de Montaigne questioned the superiority of classical thought and Rene Descartes provided a groundwork for philosophical explanation of science.

When rationalism took hold by the eighteenth century, Voltaire denounced the influence of religion on rational thought, while Rousseau championed civil rights and individual freedom. Rationalists became a symbol of the quintessential Frenchman, wielding art and philosophy to fight against the tyranny of both religion and corrupt government.

In the 20th century, writer Jean-Paul Sartre began the existential movement. Existentialism held that scientific laws and simple reason were not enough to define existence and that people must define themselves through others as well. Broad enough? Sartre evidently thought so too, as he named one of his treatises "Being and Nothingness," which pretty much covers it all.

As the 20th century progressed and technological advancements continued, French philosophy began to see science as a creative force, and radical political thought was introduced in philosophy.

When surrealism emerged, it once again altered culture by describing a new way of seeing the world, through absurdity and juxtaposition. Combined with the concept of Freudian thought, writers like Andre Breton valued the "unconscious" creation of art by merging realism with bizarre psychological tangents in their work.

Now let's take a break from thinking so hard and take a look at the traditional art and film of France.