The country's varied climate clearly influences Ethiopians' style of dress. Cool temperatures in Ethiopia's highlands dictate heavier clothing such as wraparound blankets, while the country's lowlands residents combat the heat with light cotton outfits. Yet while the clothing worn in Ethiopia reflects the traditions of the different ethnic groups in various regions of the country, there are certain similarities.

Traditional clothing, which can be regularly seen in many rural areas, consists almost entirely of woven cotton. Since the 19th century, both men and women have worn a shamma, the long cotton robe that doubles as a body and head cover. Men traditionally wear white cotton pants underneath the shamma, while women wear colorful dresses that reach to their ankles [source: Selamta].

Read on to see how each of these groups celebrates holidays and other cultural events. 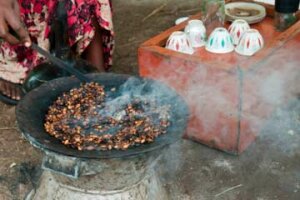