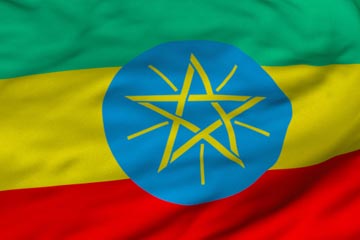 Ethiopia is the oldest independent African country and is credited with establishing the green, yellow and red colors that have come to symbolize African independence and unity.
iStockphoto/Thinkstock

Ethiopia is an ancient African country that was home to some of the earliest known humans. Nicknamed "Land of 13 Months of Sunshine" (the Ethiopian calendar has an extra five-day month called Pagume), this landlocked country in the Horn of Africa on the continent's eastern end enjoys diversity in not only its geography, terrain and climate, but also its more than 90 million people [sources: CIA, Nature News, University of Pennsylvania].

A majority of the country's inhabitants are Christians, most of whom are members of the Ethiopian Orthodox Church. The Ethiopian Orthodox Church was affiliated with the Coptic Church until 1959, and as a result, much of Ethiopia's culture and tradition is shaped by the Coptic faith, a sect of Christianity based in Egypt known for its intricate cross and whose members fast for more than 210 days a year [source: Encyclopedia Coptica].

Ethiopia's rich and diverse history and culture is on display every day in the food Ethiopians eat, the clothes they wear, and the music that they play, sing and dance to. Keep reading for a window into this vibrant country's traditions.