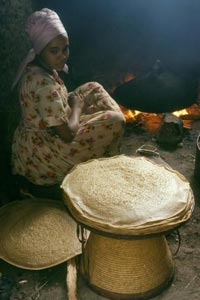 They may fast regularly, but Ethiopians are serious about their food when it's time to eat. In this country where empires and dynasties once ruled, the meal is king.

The country's staple grain is called tef, which although rarely seen outside of Ethiopia, many Ethiopians eat at least once a day. From its flour is fashioned injerja, which is a flat disc of sour bread that resembles a large pancake. Inerja is placed directly on the dining table, like a tablecloth, and diners tear it off in pieces and use the bread (rather than utensils) to scoop up a spicy stew known as wat that often makes up the main meal [source: Lost Crops of Africa].

The wat can be made from meat, vegetables or beans. Traditional Ethiopian dishes do not include pork or shellfish since the Orthodox Christian and Islamic faiths forbid the consumption of these animals. Spicy ber-beri, a native red pepper that's not for the faint of heart, and mitin shiro, a flavorful combination of ground beans, spices and chilies, are frequently used to liven up the stews.

In a typical Ethiopian meal, various courses -- consisting of several wats or alechi (the vegetarian stew served on fast days, during which chicken, meat, and dairy products are not allowed) -- are placed on the inerja at the same time. Dishes are commonly placed in the center of the table to be shared. Meals often also incorporate citrus fruits, bananas, grapes, pomegranates, figs, custard apples and vegetables such as red onion and gommen, a kalelike plant used in alechi. The last course of a meal is often kitfo, freshly ground raw beef marinated in a chili pepper mixture, and coffee is served at the end of the meal [source: University of Pennsylvania].

A meal usually begins with a hand-washing ceremony (sen'na bert) in which a woman of the house pours warm water over the fingers of each person's right hand, while holding a basin to catch the excess and with a towel hanging over her arm for drying. The ritual is repeated after the meal is over [source: University of Pennsylvania].

Next up, insights into the country's fashion sense.