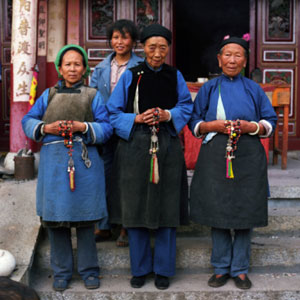 China is one of the oldest civilizations in the world.
Spike Mafford/The Image Bank/Getty Images

With a population of more than 1.3 billion people and a recorded history that goes back more than four millennia, China is both the largest country and arguably the oldest continuous civilization in the world. As such, it has rich and diverse traditions.

To understand some of China's important cultural traditions, let's first delve into some background about the country. The Han are the largest ethnic group in China, making up about 91 percent of the population. However, even Han peoples have various cultural and linguistic differences across several regions. Other major ethnic groups include Zhuang, Manchu, Hui, Miao, Uyghur, Yi and more.

About 70 percent of the Chinese people speak Mandarin, one of seven major dialects of the Chinese language [source: State.gov]. Despite differences in spoken language, however, a common written language helped strengthen unity and common social values among the civilization, as well as the political control of successive dynasties throughout history.

Although China was historically an epicenter for religious thought and practice, today only about 31 percent of adults are religious believers [source: State.gov]. The country is officially atheist, but government-sanctioned religious practice is allowed. Buddhism is the biggest religion, followed by Taoism, Islam, Protestantism and Catholicism (without official ties to the Vatican, due to government rules).

However, the country's social values have long been deeply rooted in Confucianism, which is not strictly a religion, but rather considered a way of life. For instance, Confucianism values among other things a reverence for one's ancestors, one of the most important traditions for the Chinese. In fact, Confucianism has been a major unifying factor in Chinese culture, along with written language.

Although our discussion of Chinese traditions certainly can't be exhaustive for such a culturally rich civilization, we'll cover the basics of some of their significant traditions, as well as the predominant philosophies behind them.