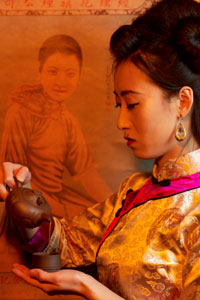 Modern Chinese have generally adopted Western-style clothing, but traditional Chinese clothing still has a place in society, especially for special occasions as it reflects their cultural heritage. Clothing traditions also have roots in Confucian ideals, as Confucius taught the importance of how people present themselves both for the individual and society.

Unified rules and customs of clothing developed in China during the dynastic period and as early as the Xia and Shang dynasties (which spanned the 21st to the 11th centuries B.C.). In general, the Chinese have traditionally valued symmetry of design and composition in their clothing styles [source: Yang].

Ancient Chinese believed two-piece outfits reflected the order of heaven and earth and considered them appropriate for ceremonial occasions. But by the Warring States period, from the 5th to 3rd centuries B.C., a one-piece robe called the shenyi became popular. Meaning "deep garment," the shenyi is made of two pieces sewn together, was considered functional and simple, but still somewhat formal [source: Hua]. The shenyi one-piece gradually evolved into the qujupao, a long robe of the Han Dynasty (3rd century B.C. to 3rd century A.D.), a long-sleeved chang shan during the Wei and Jin periods (3rd century A.D. to 5th century A.D.), and eventually into the qipao (or cheongsam) of the 20th century, a form-fitting one-piece woman's dress [source: Hua].

When the Manchu Qing dynasty took over in the 17th century A.D., this also brought changes in dress. The Manchu preferred close-fitting styles as opposed to the loose, flowing attire that had been popular. They also imposed rules that were meant to reflect Confucian principles, such as integrity and altruism [source: Condra].

During certain times in the Dynastic period, laws have governed how the different classes could dress, even down to the colors people wore. Traditionally, colors have always held special significance for the Chinese people, as they could represent the elements of earth, fire, water, metal and wood. For instance, red, representing fire, and consequently summer, life and joy, was worn for happy occasions such as weddings and births [source: Condra]. By the 17th century A.D., yellow was reserved exclusively for the emperor as it symbolized wealth and power. Green, red, black and white represented East, South, North and West respectively and at times also assigned to upper classes [source: Yang].