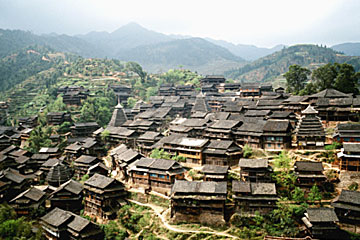 A view of a village in the Guangxi province in China.
Yann Layma/The Image Bank/Getty Images

Due to China's vast and varied landscape, the people historically developed diverse housing styles that adapted to each particular region and climate. However, we'll discuss a few of the most famous designs. And, despite the different geographical conditions, traditional Chinese dwellings are usually designed around the common values of shared communal and family space.

Dating back to ancient times, courtyard houses, also known as Beijing siheyuan buildings, are enclosed and inward-facing structures with a courtyard in the center surrounded by four, one-story housing structures. This design helps maximize sunlight, but minimize contact with the busy outside world. They are also family-oriented and meant to house four generations. Traditionally aligned along a north/south axis (which will provide good fortune, according to the principles of feng shui), the main entrance is on the south end -- usually off center and opening to an outer courtyard or transition space. A visitor would enter through another passageway before entering the main courtyard. The south side contains rooms that traditionally serve as the kitchen and servants' quarters. The main house on the north end, while the east and west sides made up smaller structures, usually for married children and their families [source: Keister].

One of the most interesting styles of Chinese residences are the so-called "cave dwellings." Despite the name, these are man-made structures dug out of the sides of cliffs or the ground. They are found along northern China, which has dry, loess soil, and using earth helps economize building materials while providing comfortable temperatures in both the summer and winter. Ones dug out of cliffs are convenient to allow inhabitants to make use of the flat land for farming. Those dug out of the ground can be either fully or partially subterranean. One of the most common designs of underground cave dwellings is actually modeled on the courtyard design. For these, the people dig a large pit in the ground, which will serve as the courtyard, and dwellings are dug out of the sides of the pit.

Another famous style is the earthen house of the Fujian province in southeast China. A group of Han Chinese known as Hakka originally built these study clay houses more than a millennium ago after they migrated south to escape wars and unrest. These structures are three or four floors high, and are in enclosed round or rectangular designs, which helped protect from invaders.