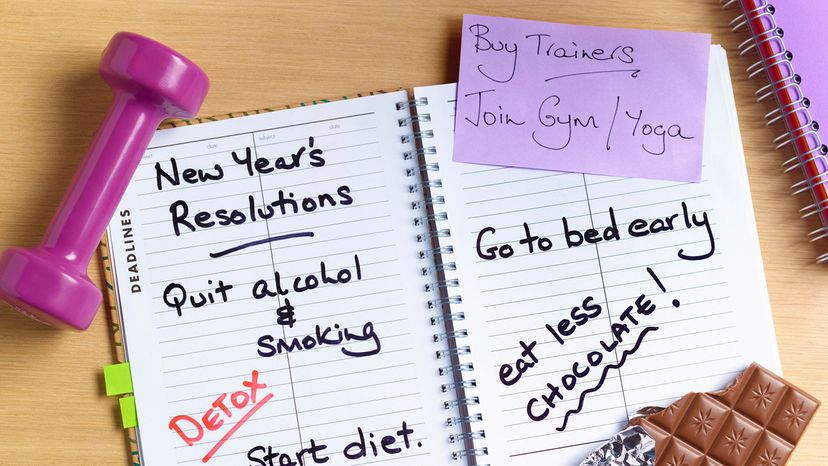 We love to make New Year's resolutions even if we seldom keep them. Why's that? Peter Dazeley/Photographer's Choice /Getty Images

Every New Year's Eve, I write a list of resolutions. Some are practical (whiten teeth), while others are a bit of a stretch (write best-selling novel). These promises to myself run the gamut — from physical to mental, possible to improbable — but all have one thing in common: They serve as my own personal road map for the next 12 months.

And I'm not alone. The concept of creating New Year's resolutions is so ingrained in U.S. culture that the U.S. government even has a list of popular resolutions and resources for achieving them. It's a baker's dozen of good intentions, including: drink less alcohol, eat healthy food, get a better education, get a better job, get fit, manage debt and manage stress.

Additional research backs up these claims. According to a 2020 YouGov poll, "exercise more" topped the list for 50 percent of resolution-making Americans, closely followed by "save money," and "eat more healthily." "Lose weight" and "reduce stress" occupied positions four and five and were set by a third of poll respondents.

As someone who's made No. 1 and No. 4 resolutions (more than once), I wanted to know: Is it true that most people don't keep their resolutions? The answer, I am relieved to discover, appears to be a resounding "yes."

Richard Wiseman, a psychologist and author with a penchant for mass participation experiments, discovered that 52 percent of people making New Year's resolutions were confident they'd stick it out. Yet only a scant 12 percent really did [source: Eisenstadt].

Then why bother? New Year's resolutions are, as one author wrote, "a triumph of hope over experience" [source: Westacott]. They're a way to quantify what we wish for ourselves. They are a means to cataloguing our personal dissatisfactions. And, perhaps most importantly, they are a method of erasing errors of the past year.

Yes, New Year's resolutions are all about hopefulness. And it's always been that way.

When did ringing in the New Year become such a big deal? Turns out, it isn't just a construct of modern Americans. Some 4,000 years ago, Babylonians rang in their new year with an 11-day festival in March, and ancient Egyptians celebrated the advent of their new calendar during the Nile River's annual flood. By 46 B.C., Roman emperor Julius Caesar had moved the first day of the year to Jan. 1 in honor of the Roman god of beginnings, Janus, an idea that took some time to catch on. However, in 1582, Pope Gregory XIII brought the Jan. 1 New Year back in vogue with the Gregorian calendar -- a concept that persists today.

The origin of making New Year's resolutions rests with the Babylonians, who reportedly made promises to the gods in hopes they'd earn good favor in the coming year. They often resolved to get out of debt [source: History].

Sounds familiar? Many of us are still making that resolution today. So what's the secret to keeping it? Turns out, simply wanting to change is not enough; you need to make it stick. One way to do this is to share your resolution with others.

"When you keep resolutions a secret, no one is going to check up on you. You're only accountable to yourself," says Joe Ferrari, professor of psychology at DePaul University in Chicago. He says that a party to publicly share your resolutions is an admirable way to ring in the New Year. Social media offers another avenue to let others in on your goals.

Once you've involved others in your resolutions, what steps can you take to ensure that when they do check up on you, you have something positive to report? Here's some advice from the experts.

Resolutions are For the Young

While the majority of Americans age 45 and younger plan to make a New Year's resolution, only 28 percent of those 45 and older will vow to make changes [source: Marist Poll]. Clearly, experience trumps hope, here.

The Psychology of New Year's Resolutions

The success of your New Year's resolutions starts with your head. Limiting yourself to a few resolutions, maybe even one, and being specific are a few things to keep in mind, says Michael Kitchens, assistant professor of psychology at Lebanon Valley College in Annville, Pa. "It's tempting to make a list of 'to-dos,' but that list will easily be overwhelming and you will end up frustrated."

Setting a specific goal can make all the difference, such as "I want to lose 10 pounds by March 1" or "I want to save $50 of each paycheck."

"Set a goal that is challenging, but manageable," says Kitchens. "This is a sensitive balance that really can only be made by each person."

Overly ambitious goals can drain a person's confidence when they're not met, agrees Ferrari. Instead, build on small, observable victories and possibly achieve bigger goals down the line. "Don't try and do everything," he says. "Take things on one at a time."

Whatever goals you do tackle, be sure to monitor your progress. "If your resolution is to lose weight, check your weight regularly. If it's to save money, write down where you've spent your money. Monitoring those few, challenging goals you set will dramatically improve your success rate," Ferrari says. Sometimes, just the act of recording everything you eat or spend can cause you to eat or spend less even if you don't consciously change anything else.

Many resolutions include overcoming bad habits, such as smoking, overeating or too much alcohol consumption. These could be tough because they are easy to rely on when stressed out.

"While these vices are especially difficult to overcome, they can be beaten," says Kitchens. "One of the best ways is to have a social support system." In other words, when you're feeling stressed, call a friend rather than open a bottle of red wine.

Whatever your New Year goals, give yourself some time to make them a reality. More time than you may have planned on, actually. While most people cling to the widespread belief that new habits can be formed in 21 days, new research is suggesting we need a longer timetable. One study found it took participants an average of 66 days to do something different -- and stick with it [source: PsyBlog].

The good news? If you take this advice, your new gym membership won't become obsolete until March.

Although I doubt I'll keep them all (haven't yet), I'll still make resolutions this New Year's Eve. After researching this article, though, I will be doing one thing differently. This year, instead of sweeping goals that probably won't come to fruition, I'm going to divide them into more manageable pieces. Experts say I'll be more successful with goals that have easily identifiable steps -- and a reasonable timeframe in which to do them. 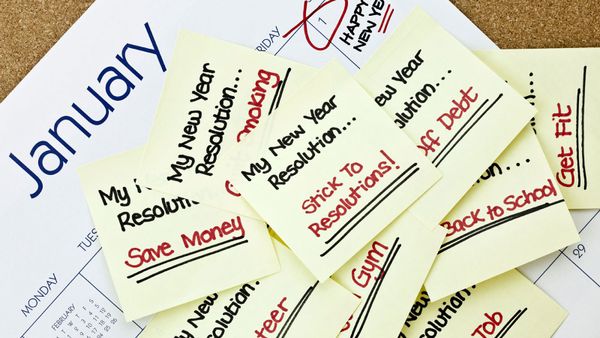 Up Next
Why Are New Year's Resolutions So Easy to Break?
Explore More 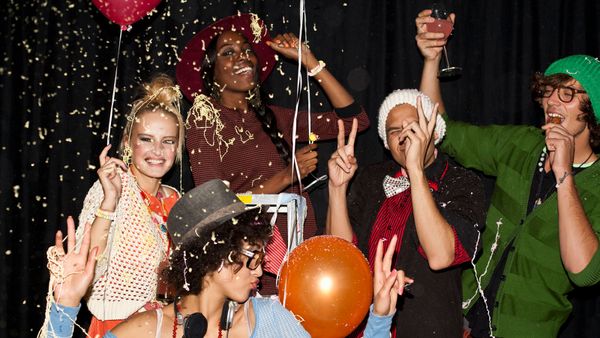