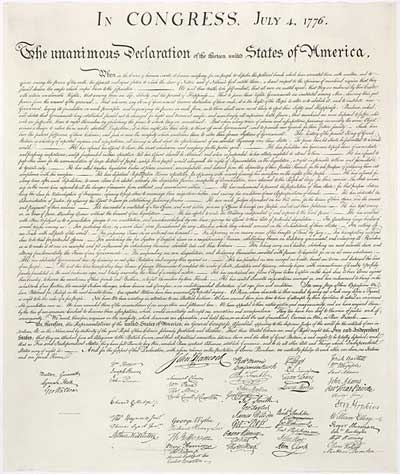 The Declaration of Independence
Photo courtesy of the U.S. Government

In his ­autobiography, Thomas Jefferson gives us his take on the Declaration of Independence story. You can find an excerpt here.

Everybody knows that the U.S. Declaration Independence was signed on July 4, 1776. But where did the declaration come from? And what were the signers actually signing?

One of the most interesting things we find in Jefferson's narrative is that the Declaration of Independence was not the first document of this sort that Thomas Jefferson wrote. In July of 1774 he wrote a preliminary document known as "A Summary View of the Rights of British America" [source: Liberty Online]. It laid out a fundamental premise: that Britain should have no authority over the American colonies. This went way beyond the "no taxation without representation" idea, and it summarized the basic beliefs of many colonists. They wanted to be free of British rule. Jefferson's document put those beliefs into print for the first time.

In Congress, Friday June 7, 1776. The delegates from Virginia moved in obedience to instructions from their constituents that the Congress should declare that these United colonies are and of right ought to be free & independent states, that they are absolved from all allegiance to the British crown, and that all political connection between them and the state of Great Britain is and ought to be, totally dissolved; that measures should be immediately taken for procuring the assistance of foreign powers, and a Confederation be formed to bind the colonies more closely together.

Why were people thinking this way? One reason is a man named John Locke, who wrote about the role of government. For example, Locke's "Second Treatise of Civil Government contains many of the ideas that made their way into the Declaration of Independence [source: Oregon State University].

The five members chosen to write the Declaration of Independence presenting the document to Congress.
Public domain image

Congress created a committee on June 11, 1776, to write an official declaration of independence. On the committee were John Adams, Benjamin Franklin, Thomas Jefferson, Robert Livingston and Roger Sherman. The committee asked Jefferson to write the Declaration and he worked on it to create a rough draft between June 12 and June 27. This document was read to Congress on June 28, and debates and revisions ensue over the next several days. The declaration was adopted by congress on July 4, 1776. Printed version­s were sent out to the colonies on July 5. A newspaper version was printed for the first time in a Pennsylvania newspaper on July 6. It was read to the members of George Washington's Army on July 8. And so on.

It was an amazing time, and an amazing document, that gave birth to the United States of America.

For more American history articles and lots more on government, try the links that follow.