'The Story of Silent Night' 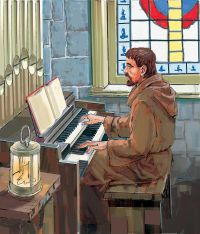 Father Joseph Mohr sat at the old organ. His fingers stretched over the keys, forming the notes of a chord. He took a deep breath and pressed down. Nothing. He lifted his fingers and tried again. Silence echoed through the church.

Father Joseph shook his head. It was no use. The pipes were rusted, the bellows mildewed. The organ had been wheezing and growing quieter for months, and Father Joseph had been hoping it would hold together until the organ builder arrived to repair it in the spring. But now, on December 23, 1818, the organ had finally given out. St. Nicholas Church would have no music for Christmas.

Father Joseph sighed. Maybe a brisk walk would make him feel better. He pulled on his overcoat and stepped out into the night. His white breath puffed out before him. Moonlight sparkled off the snow-crusted trees and houses in the village of Oberndorf. Father Joseph crunched through the snowy streets to the edge of the little Austrian town and climbed the path leading up the mountain.

From high above Oberndorf, Father Joseph watched the Salzach River ripple past St. Nicholas Church. In the spring, when melting snow flowed down the mountains and the river swelled in its banks, water lapped at the foundation of the church. It was moisture from the flooding river that had caused the organ to mildew and rust.

Father Joseph looked out over the Austrian Alps. Stars shone above in the still and silent night.

Silent night? Father Joseph stopped. Of course! "Silent Night!" He had written a poem a few years before, when he had first become a priest, and he had given it that very title. "Silent Night."

Father Joseph scrambled down the mountain. Suddenly he knew how to bring music to the church.

The next morning, Father Joseph set out on another walk. This time he carried his poem. And this time he knew exactly where he was going -- to see his friend Franz Gruber, the organist for St. Nicholas, who lived in the next village.

Franz Gruber was surprised to see the priest so far from home on Christmas Eve, and even more surprised when Father Joseph handed him the poem.

That night Father Joseph and Franz Gruber stood at the altar of St. Nicholas Church. Father Joseph held his guitar. He could see members of the congregation giving each other puzzled looks. They had never heard a guitar played in church before, and certainly not during midnight mass on Christmas Eve, the holiest night of the year.

Father Joseph picked out a few notes on the guitar, and he and Franz Gruber began to sing. Their two voices rang out, joined by the church choir on the chorus. Franz Gruber's melody matched the simplicity and honesty of Father Joseph's words.

When the last notes faded into the night, the congregation remained still for a moment, then began to clap their hands. Applause filled the church. The villagers of Oberndorf loved the song! Father Joseph's plan to bring music to St. Nicholas Church had worked.

A few months later, the organ builder arrived in Oberndorf and found the words and music to "Silent Night" lying on the organ. The song enchanted him, and when he left, he took a copy of it with him.

Today, cathedral choirs and carolers from New York to New Zealand sing the simple song that was first played in a mountain church in Austria on Christmas Eve nearly 200 years ago. -- By Dick Smolinski

You'll never look at Christmas tree tinsel the same way after reading the story on the following page, "The Story of Christmas Spiders."