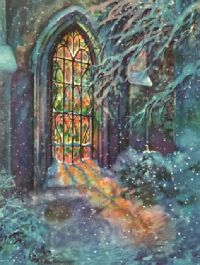 At the Christmas Eve church service, I sat with my two boisterous grandchildren, ages three and five. Their parents sat in front of the church to present a nativity reading titled "Silent Night." They had warned the children to behave. I had warned the children to behave. With scrubbed angelic faces and Christmas wonder in their eyes, they looked like model children posing for a magazine holiday spread. I indulged myself in a few moments of pride.

Alec pinched Aubrey. I was grateful that the organ thundered into the first hymn just then, drowning out her yelp. I grabbed her hand before she could return the pinch. During the Lord's Prayer, Aubrey shredded the program I had given her to color on. The crayons had already rolled under the pew. I watched bits of paper fall on the carpet like snow. I would help her pick it up later, but for now the naughtiness I was allowing kept her occupied and her brother quietly admiring.

We were enjoying an uneasy truce when their parents stood to deliver the reading.

She frowned, and he sat back in his seat.

"Silence," my son said to the congregation. "Think for a moment what that word means to you."

My daughter-in-law signed his words. Earlier that year, she began to use her new signing skills for the benefit of the few hearing-impaired members of our church.

Alec said a naughty word, thankfully too low for many to hear. I scowled at him, shaking my finger and my head. Aubrey grinned. Then she proclaimed, every syllable enunciated perfectly, in a clear voice that carried to far corners of the sanctuary, "Alec is a potty mouth!"

Everyone stared. I was too stunned to speak. My son and his wife looked at each other. But instead of anger, I saw surprise.

My son set aside his script and told another story. He told about their daughter being born profoundly deaf. He talked about four years of hearing aids and speech therapy with no guarantee she would ever learn to speak plainly. He talked about the rugged faith that kept the family praying she would have a normal life.

He said Aubrey's outburst was an answer to prayer: the first perfectly enunciated sentence she had ever spoken.

From the back of the room, a lone voice sang the last line of a beloved Christmas Carol: Hark! The herald angels sing, Glory to the newborn king.

While the congregation sang four verses of the unscheduled hymn, my two little angels wiggled in their parents' arms, adding laughter and giggles to the joyful Christmas noise. -- By Carol Stigger

"Into the Wind" is about how love is blown into a lonely woman's life one Christmas. You'll find this story on the next page.