'A Gift in the Trees' 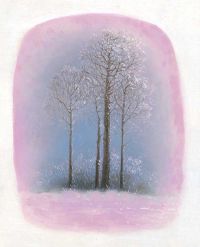 God shows his love for us in many ways. Something that may not seem extraordinary to one person might appear as a miracle for someone else. On Christmas Eve 1997, that is exactly how I saw things, though not at first. At first I was feeling too sorry for myself to see anything but my own unhappiness.

The holiday season is a popular time for couples to get engaged. I had been in three long-term relationships by the time I was 29, but none of them had ever produced a marriage proposal. I had always considered myself a loyal, caring, unselfish girlfriend, and boyfriends often told me as much after the relationship had ended. I always seemed to be "the one that got away," and I began to feel like I was special only once the relationship was over. After a while, I started to feel like I just wasn't worth a lifetime commitment.

At the age of 29, I decided I needed to take my own happiness into consideration. It took a couple years of dating mistakes, but I finally figured out how to respect my own needs and not just worry about the needs of my partner. That's when, at the age of 31, I met Paul. He was a wonderful person who didn't expect me to take care of him. He just wanted to be with me, and he respected me for who I was. Everything felt right between us, and I figured I had finally found a man I could marry.

During our second Christmas together, I thought Paul might propose. On December 22, we ventured onto the topic of marriage. Paul said that he did see himself marrying me, but the timing was not good "right now." I couldn't help but feel sorry for myself. So many of my friends had received proposals and engagement rings, but I had never received either. I was at the point where I figured maybe marriage just wasn't in the cards for me.

On the following day, December 23, school was canceled because of a winter storm. I knew my students would be as excited as I was for the extra day off right before the holiday break. It would also be nice to have a beautiful, white Christmas. The roads were covered in snow, and the trees were buried under a sheer layer of ice. It was much too hazardous to venture out, so I just stayed inside and reflected on my situation.

By the end of that snowy day, I had come to the conclusion that it wasn't the proposal I needed. It was simply that I wanted to feel loved and appreciated enough that someone would want to be with me forever. I prayed to God and asked that someday a man would think I was important enough to give me a diamond, the symbol of the commitment that my heart needed the most.

Christmas Eve finally arrived. Paul came to my house so we could ride together to my sister's holiday party. I was happy to be with him but a little sad knowing he wouldn't be proposing that night.

By this time, almost all the snow and ice had quietly melted away. I realized that we wouldn't have a white Christmas after all. It would, however, make the drive to the party much safer.

The gathering was a happy one. My nieces and nephew were a joy to watch as they opened their gifts. Paul and I had a wonderful time with my family. Eventually, after all the gifts had been opened and all goodbyes repeatedly exchanged, we left.

It was a long, quiet ride home, as Paul fell asleep 25 minutes into the trip. The roads were dry and the trees were barren. Yet the stars shone brightly against the black, cloudless sky, adding a touch of beauty to the night.

As I neared my home, a small group of trees caught my attention. They stood out from the rest of the dull, dry landscape. Of all the tress I had passed on my way home, these were the only ones that had any sign of the recent winter storm upon their branches. As I drove, I wondered how this could be. The temperature was much too warm. Yet somehow the branches were covered in an incredible layer of ice. I had seen ice-covered trees many times before, but something about these was extraordinary. This was a dazzling light like I had never seen before.

As I gazed at the beautiful trees, warmth spread through my heart. This was a truly magical moment. No longer was I seeing these winter-decorated branches with the eyes on my face; I now looked upon them with the eyes in my heart and soul. That night -- Christmas Eve 1997--the air was clean and crisp, the sky was entirely filled with stars, and the trees...the trees sparkled with diamonds. Thousands and thousands of diamonds.

In my heart I knew this was God's way of answering my prayers. I had needed him to show me that there was a man who thought I was worth a commitment, the commitment that is symbolized by a diamond ring. That Christmas Eve, God covered the trees in diamonds for my eyes and heart to behold. It was his way of showing me that he thought I was special and worthwhile enough for an eternal commitment.

As Paul slept quietly in the seat next to me, completely unaware of the miracle that had taken place, joyous tears of peace and self-worth streamed down my face. I knew that I had found someone who would love me forever, and realizing this was more profound and meaningful than any marriage proposal I could ever receive. -- By Cynthia J. Teixeira

Go to the next page to read "Heaven and Angels Sing," a truly inspirational story about a Christmas Eve church service.