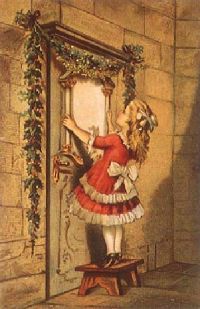 The year our youngest daughter, Shelly, was four, she received an unusual Christmas present from "Santa."

She was the perfect age for Christmas, able to understand the true meaning of the season, but still completely enchanted by the magic of it. Her innocent joyfulness was compelling and catching -- a great gift to parents, reminding us of what Christmas should represent no matter how old we are.

The most highly prized gift Shelly received that Christmas Eve was a giant bubble-maker, a simple device of plastic and cloth the inventor promised would create huge billowing bubbles, large enough to swallow a wide-eyed four-year-old. Both Shelly and I were excited about trying it out, but it was after dark so we'd have to wait until the next day.

Later that night I read the instruction booklet while Shelly played with some of her other new toys. The inventor of the bubble-maker had tried all types of soaps for formulating bubbles and found that Joy dishwashing detergent created the best giant bubbles. I'd have to buy some.

The next morning, I was awakened very early by small stirrings in the house. Shelly was up. I knew in my sleepy mind that Christmas Day festivities would soon begin, so I arose and made my way toward the kitchen to start the coffee. In the hallway, I met my daughter, already wide awake, the bubble- maker clutched in her chubby little hand, the magic of Christmas morning embraced in her four-year-old heart. Her eyes were shining with excitement, and she asked, "Daddy, can we make bubbles now?"

"Shelly," I said, my voice almost pleading and perhaps a little annoyed, "it's too early. I haven't even had my coffee yet."

Her smile fell away. Immediately I felt a father's remorse for bursting her bright Christmas bubble with what I suddenly realized was my own selfish problem, and my heart broke a little.

But I was a grown-up. I could fix this. In a flash of adult inspiration, I unshouldered the responsibility. Recalling the inventor's recommendation of a particular brand of bubble-making detergent -- which I knew we did not have in the house -- I laid the blame squarely on him, pointing out gently, "Besides, you have to have Joy."

I watched her eyes light back up as she realized, in less than an instant, that she could neutralize this small problem with the great and wonderful truth she was about to reveal.

"Oh, Daddy," she promised, with all the honesty and enthusiasm and Christmas excitement she could possibly communicate, "Oh, Daddy, I do."

I broke records getting to the store, and in no time at all we were out on the front lawn creating gigantic, billowing, gossamer orbs--each one filled with Joy and sent forth shimmering into the Christmas sun. -- By Ted A. Thompson

On the next page, you'll find "O Holy Night." In it, a barn doubles as a church -- and with special results.