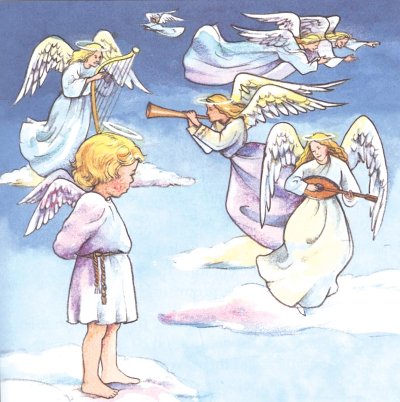 ©2007 Publications International, Ltd. In heaven, the big angels danced in the sky. The Littlest Angel was just learning how to fly.

A very long time ago, long before anybody on earth today was born, there was no Christmas season -- no gaily decorated Christmas trees, no yuletide gift-giving, no carolers singing on a snowy December night. That’s because it was a time before the birth of Jesus in a lowly stable in Bethlehem.

There was such a thing as Heaven, of course, the home of glorious angels who sailed the skies on beautiful white-feathered wings. They wore long, flowing white gowns, and their golden hair fell in waves and curls down their backs.

They were tall and strong and swift -- all except the Littlest Angel, who was tiny, with short, curly blonde locks. She had just got her wings and was only now learning to fly. One day, Archangel Gabriel made an important announcement. “Tonight,” declared Gabriel in a ringing voice, “we fly to earth to honor the birth of the Prince of Peace! We will sing hymns throughout the world, giving tidings of great joy!”

The Littlest Angel jumped up and down with excitement. Tonight was the night she had heard so much about! For weeks, the big angels had been planning a splendid celebration. Would she be allowed to go along? The Littlest Angel’s singing voice was still weak, but she had a worse problem: She couldn’t fly as fast as the others. It did not look promising

“Unless I get a head start,” she thought, and this cheered her up. “If I go now, I’ll be in Bethlehem before the others get there. Won’t they be surprised to see me!”

©2007 Publications International, Ltd. The Littlest Angel wanted to make it to Bethlehem before the bigger angels.

At that moment, the Littlest Angel happened to be strolling beside Heaven’s crystal sea. On the shore grew thousands of starflowers with their golden centers and five pearl-white petals. Starflowers were valued on earth as a sign of hope and would surely make a lovely gift for the newborn infant. So the Littlest Angel gathered a bunch and stuck them inside the sash of her robe.

It was time to test her wings in a way they’d never been tested before. The Littlest Angel climbed atop the highest cloud, then jumped! Miraculously, her baby wings spread wide, and the Littlest Angel glided in the bright air. Now the wings began to beat, and she aimed for planet Earth down below.

When the Littlest Angel landed, she looked around. Where did Bethlehem lie? The sun was setting, and there was no one in sight. But then in the distance she saw a village with houses of mud brick and stone, so she headed down the dirt road toward it.

On the way, the Littlest Angel heard a pitiful sound from a nearby olive tree. A mother dove was cooing sadly from a high branch. Below, her baby, which had fallen from its nest, was struggling to fly but with no success. It was too young. The Littlest Angel picked up the birdling.

“You poor thing,” she said. Up the Littlest Angel flew and settled the little dove gently in the nest. The mother thanked her with all her heart. A starflower fell from the Littlest Angel’s sash and landed where the dove had fallen. Suddenly, a bell rang out through the winter evening.

The Littlest Angel came to a one-room hut and peered inside a window. There sat a careworn young mother watching over her little son, who slept fitfully in a cradle. The Littlest Angel could see the child’s skin was hot and damp, and tendrils of hair clung to his cheeks and forehead. The mother rocked the cradle and wept softly to herself.

©2007 Publications International, Ltd. The Littlest Angel had the power to heal a feverish child.

The child opened his feverish eyes and smiled as the Littlest Angel tiptoed in. The angel laid a cool hand on the boy’s forehead, and the fever went away instantly. Soon the child closed its eyes and slept soundly.

As the Littlest Angel walked back through the door, a few starflowers fell from her sash, and a second bell rang out. It had grown dark, so she left the village and continued down the road. The Littlest Angel’s wings ached too much to fly. She had no idea where she was headed, and she was so tired that she almost forgot why she had visited earth in the first place.

She was lost, too. Where was Bethlehem? The Littlest Angel seemed no nearer to the end of her journey than when she began, and she now had only a single starflower left. This troubled her. “What will happen if I lose this, too?” she thought. “I’ll have nothing to give Jesus.”

©2007 Publications International, Ltd. The Littlest Angel was sure she was too late for the celebration as she watched a group of singing angles flying by.

As if to make matters worse, the Littlest Angel stubbed her toe on a stone in the road. She hopped around, holding her injured foot. Suddenly overhead, a host of angels flew past, singing “Glory to God in the highest, and on earth peace to men of good will!” “Oh, no!” cried the Littlest Angel. “I’m too late!”

A short time later, the Littlest Angel heard the sound of bleating nearby. In the bushes beside the road lay a little lamb that had broken its foreleg. She took pity on the suffering creature and gathered it up in her arms. “Come with me to Bethlehem,” said the angel, “that is, if I can ever find it!” The last starflower slipped unnoticed from her sash and fell in the dirt road. A third bell rang out through the night.

The Littlest Angel carried her pitiful burden down the road, and it seemed to get heavier and heavier. Her arms and legs were sore with fatigue. At the moment that she thought she might have to stop and rest, the Littlest Angel glimpsed light shining from far off. The closer it got, the more it seemed to be coming from a stable. “Well stop there,” whispered the Littlest Angel, for the lamb had fallen asleep in her arms.

©2007 Publications International, Ltd. The Littlest Angel was amazed by the sights and sounds coming from the stable.

When the angel and her little lamb got within a short distance of the stable, they were greeted by the most amazing sights and sounds. On the ground, several people had gathered. They were mostly poor and humble, but three men bearing costly gifts rode camels and were dressed in rich robes.

The people were oddly quiet, but every now and then the Littlest Angel heard hushed words being spoken in strange languages. Overhead in the velvet darkness flew scores of angels in a fiery blaze of light. Some were singing hymns, while others played shiny brass horns.

High above shone a single star, brighter and steadier than any the Littlest Angel had ever seen The Littlest Angel walked through the stable’s bright doorway and was so astonished by what she saw that she nearly dropped the lamb.

©2007 Publications International, Ltd. The Littlest Angel found herself in the presence of the infant Jesus and his parents, Mary and Joseph.

There, in the straw, sat a pale but beautiful young woman holding a newborn infant in her arms. A bearded man wearing robes dusty from travel looked on. The Littlest Angel knew at once that she was in the presence of Jesus and his parents, Mary and Joseph. She laid the lamb in the straw and reached for her last starflower, but it wasn’t there!

Mary smiled lovingly on the Littlest Angel. “I know what you’re thinking,” she said sweetly, “but you have brought a far greater gift -- a creature in need.” The baby Jesus reached out and, with his dimpled hand, touched the lamb’s broken leg. Instantly the animal leaped up and frisked about.

©2007 Publications International, Ltd. The Littlest Angel was so excited about her new responsibility that she flew faster than ever before.

“Not only that,” added Mary, “but your good deeds have caused the Chime of Love to ring out three times tonight. Because of this, I ask that you visit every year and bring this music to people of good will.”

The Littlest Angel was overjoyed. Such an important responsibility for one so little! She flew back to Heaven in a burst of speed. And every Christmas, you’ll hear this magical bell ring out -- that is, if you’ve been kind and good throughout the year!