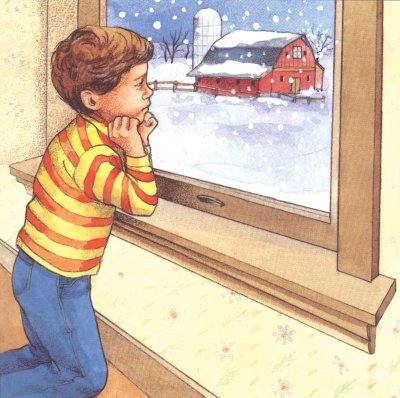 Davey wondered if he would see his older brother Josh this Christmas.
©2007 Publications International, Ltd.

Davey looked out the window at the falling snow. Usually he loved snow, but today he was sad. It was Christmas Eve, and the snow was so deep that it might ruin Christmas for Davey. Because of the snowstorm, Davey was afraid that his older brother Josh would never make it home for Christmas.

“And I have such a special present for him!” Davey said to himself. “If only he could get here!" With his best crayons, Davey had drawn a picture of the barn on their farm. He was going to give it to Josh for Christmas to hang in his room at college. Davey turned away from the window with a sigh.

Just then, Dad called, “How about some help shoveling the driveway? We’re going to try to make it into town to finish our Christmas shopping. We also have to buy our tree, don’t forget.”

Davey ran to get his boots and coat. He followed Dad out into the snow. Davey picked up his small shovel and set to work, while Dad used his bigger one. Helping Dad shovel the snow made Davey feel better.

Soon, Davey and Dad and Mom were on their way to town. Because of the snow, they had to drive slowly. “I brought my picture for Josh with me,” Davey said as they rode along. “Maybe I can find a frame to fit it when we get to the store.” “Good idea,” said Mom. “I’ll help you look.”

When they got to town, they went to the Christmas tree lot. Davey was the first one out of the car. He ran over to a beautiful, glossy, tall tree. “Look at this one!” he shouted to Mom and Dad. “Josh will love this tree!” Then he remembered. Josh probably wouldn’t be home at all. Davey felt sad again.

Mom and Dad came over to see the tree Davey had found. “That’s a great tree, Davey,” said Dad with a smile. “I think you’re right. It’s the one we should get.” Mom added, “And even if Josh doesn’t get here to see it, he’d still be happy we have such a beautiful tree.”

Later, at the store, Mom took Davey to the counter where picture frames were sold. Davey looked at all the frames. Finally he said, “I like this wooden one. It reminds me of the wooden barn in my picture.”

The wooden frame was just the right size for his picture. Davey was very pleased. “I’m getting this just in case Josh makes it home for Christmas,” he said. Mom patted him on the shoulder. “I know how much you want Josh to be here tonight,” she said, “but it is still snowing hard. I really don’t think hell make it. So you mustn’t be too disappointed.”

“At least I can wish he’d come,” Davey said. As they were about to leave the store, Davey saw a crowd of people. “What are all those people looking at?” Davey wondered. He ran to get a closer look. Looking around the man in front of him, Davey could see what was at the center of the crowd.

©2007 Publications International, Ltd. Davey was desperate to speak to Santa, so he asked his parents permission.

It was Santa! Children were sitting on Santa’s lap and talking to him. “Can we get in line, please Dad?” begged Davey. “Well, we’re kind of in a hurry. We need to be back home before the snow gets too deep,” said Dad. “But since this is Santa, I guess we can spare the time.”

Davey gave Dad a big thank-you hug and ran to get in line. It seemed to take forever, but at last it was his turn. When Davey climbed up on Santa’s lap, Santa said, “Well, well, and what would you like for Christmas?”

“I wish my brother Josh could get home for Christmas,” Davey said. “But the snow is so deep that Mom and Dad don’t think he can make it.” “I don’t usually deliver people on Christmas Eve, just toys,” said Santa. “But I’ll tell you what. Tonight, before you go to sleep, make your wish on the biggest, brightest star in the sky. That’s the Wishing Star.”

“Will it really work?” Davey asked Santa. “Well, you never can tell about wishes, so I don’t make any guarantees,” said Santa. “But it surely doesn’t hurt to try!”

On the way home in the car, Davey saw that the snow was coming down harder and harder. When he and Mom and Dad were almost to the house, Davey talked about Santa’s Wishing Star. “We all make wishes every now and then,” said Mom, “but sometimes they just can’t come true.”

“I’m going to try, anyway,” insisted Davey. That night after dinner, Dad put the Christmas tree in its stand, and Mom and Davey joined him in decorating it with colored lights and balls and lots of tinsel.While they were working, Davey thought sadly, “It would be so great if Josh were here to see our beautiful tree.” Dad Put a golden angel on the very top. “I think this is the best tree we’ve ever had!” he exclaimed.

©2007 Publications International, Ltd. Davey and his family put the final touches on the Christmas tree.

Davey went over to the window and looked out. The snow had stopped falling. And there, right overhead, was a star Davey had never seen before. It was big and bright and sparkling. It was the biggest and brightest star in the sky, just as Santa had said.

Davey looked at the star and said, “Wishing Star, please let my Christmas wish come true. I wish that Josh would come home tonight, so we can all be together for Christmas.” Then Davey closed his eyes and wished as hard as he could.

Davey spoke to the wishing star one last time before bed. He hoped to see his brother Josh for Christmas.
©2007 Publications International, Ltd.

Too soon, Davey heard Mom’s voice. “Time for bed, little one. If you go right to sleep, it will be Christmas morning before you know it.” Davey hung his stocking by the fireplace. He kissed Mom and Dad and started up the stairs to his room.

Just then, the three of them heard a sound outside the front door. “Who could that be?” asked Dad.Suddenly the door flew open, and there was Josh! Davey raced to the door, flung his arms around his brother, and gave him the biggest hug he could manage. Josh had made it home after all. Davey’s Christmas wish had come true!

Later that night, when Davey was finally in bed, he looked out his window. Sure enough, the Wishing Star was still high in the sky. “Thank you, Wishing Star,” he whispered. “I knew you could do it. You’ve made this my best Christmas ever!”

Sometimes if we wish hard enough, our dreams will come true. In the next story -- 'The Little Match Girl' -- find out how a little girl who always seemed to end up cold, hungry, and alone eventually finds her way to the perfect "home."