'The Legend of the Poinsettia' 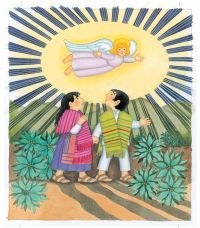 Maria and Pablo lived in a tiny village in Mexico. Because Christmastime at their house did not include many gifts, Maria and Pablo looked forward to the Christmas festivities at the village church with great joy and anticipation.

To honor the birth of Christ, the church displayed a beautiful manger that drew crowds of admirers. Villagers walked miles to admire the manger, bringing lovely, expensive gifts for the Baby Jesus. As Maria and Pablo watched the villagers place their gifts in the soft hay around the manger, they felt sad. They had no money to buy gifts for their family and no money to buy a gift for the Baby Jesus.

One Christmas Eve, Maria and Pablo walked to the church for that evening's services, wishing desperately that they had a gift to bring. Just then, a soft glowing light shone through the darkness, and the shadowy outline of an angel appeared above them.

Maria and Pablo were afraid, but the angel comforted them, instructing them to pick some of the short green weeds that were growing by the road. They should bring the plants to the church, the angel explained, and place them near the manger as their gift to the Baby Jesus. Then just as quickly as she had appeared, the angel was gone, leaving Maria and Pablo on the road looking up into the dark sky. Confused but excited, the children filled their arms with large bunches of the green weeds and hurried to the church.

When the children entered the church, many of the villagers turned to stare. As Maria and Pablo began placing the weeds around the manger, some of the villagers laughed at them. "Why are those children putting weeds by the manger?" they asked each other. Maria and Pablo began to feel embarrassed and ashamed of their gift to the Baby Jesus, but they stood bravely near the manger, placing the plants on the soft hay, as the angel had instructed.

Suddenly, the dull green leaves on the tops of the plants began to turn a beautiful shade of red, surrounding the Baby with beautiful blooms. The laughing villagers became silent as they watched the green plants transform into the lovely star-shaped crimson flowers we call poinsettias. As they watched the weeds bloom before their eyes, Maria and Pablo knew they had no reason to be ashamed anymore. They had given the Baby Jesus the only gift they could--and it was the most beautiful gift of all.

Today, poinsettias are a traditional symbol of Christmas, thanks to young Maria and Pablo and their special gifts to the Baby Jesus. -- By Stephanie Herbek

Our next story tells of the birth of Jesus, "The First Christmas."