'A Slice of Life' 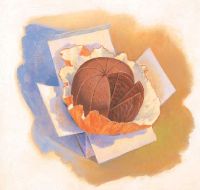 Jean heaved another world-weary sigh. Tucking a strand of shiny black hair behind her ear, she frowned at the teetering tower of Christmas cards waiting to be signed. What was the point? How could she sign only one name? A "couple" required two people, and she was just one.

The legal separation from Don had left her feeling vacant and incomplete. Maybe she would skip the cards this year. And the holiday decorating. Truthfully, even a tree felt like more than she could manage. She had canceled out of the caroling party and the church nativity pageant. Christmas was to be shared, and she had no one to share it with.

The doorbell's insistent ring startled her. Padding to the door in her thick socks, Jean cracked it open against the frigid December night. She peered into the empty darkness of the porch. Instead of a friendly face -- something she could use about now -- she found only a jaunty green gift bag perched on the railing. From whom? she wondered. And why?

Under the bright kitchen light, she pulled out handfuls of shredded gold tinsel, feeling for a gift. Instead, her fingers plucked an envelope from the bottom. Tucked inside was a typed letter. It was a...story?

The little boy was new to the Denmark orphanage, and Christmas was drawing near, Jean read. Already caught up in the tale, she settled into a kitchen chair.

From the other children, he heard tales of a wondrous tree that would appear in the hall on Christmas Eve and of the scores of candles that would light its branches. He heard stories of the mysterious benefactor who made it possible each year.

The little boy's eyes opened wide at the mere thought of all that splendor. The only Christmas tree he had ever seen was through the fogged windows of other people's homes. There was even more, the children insisted. More? Oh, yes! Instead of the orphanage's regular fare of gruel, they would be served fragrant stew and crusty, hot bread that special night.

Last, and best of all, the little boy learned, each of them would receive a holiday treat. He would join the line of children to get his very own....

Jean turned the page. Instead of a continuation, she was startled to read: "Everyone needs to celebrate Christmas, wouldn't you agree? Watch for Part II." She refolded the paper while a faint smile teased the corner of her mouth.

The next day was so busy that Jean forgot all about the story. That evening, she rushed home from work. If she hurried, she'd probably have enough time to decorate the mantle. She pulled out the box of garland, only to drop it when the doorbell rang. Opening the door, she found herself looking at a red gift bag. She reached for it eagerly and pulled out the piece of paper.

...to get his very own orange, Jean read. An orange? That's a treat? she thought incredulously.

He knew the smell, tangy sweet, but only the smell. He had sniffed oranges at the merchant's stall in the marketplace. Once he had even dared to rub a single finger over the brilliant, pocked skin. He fancied for days that his hand still smelled of orange. But to taste one, to eat one? Heaven.

The story ended abruptly, but Jean didn't mind. She knew more would follow.

The next evening, Jean waited anxiously for the sound of the doorbell. She wasn't disappointed. This time, though, the embossed gold bag was heavier than the others had been. She tore into the envelope resting on top of the tissue paper.

Christmas Eve was all the children had been promised. The piney scent of fir competed with the aroma of lamb stew and homey yeast bread. Scores of candles diffused the room with golden halos. The boy watched in amazement as each child in turn eagerly claimed an orange and politely said "thank you."

The line moved quickly, and he found himself in front of the towering tree and the equally imposing headmaster.

"Too bad, young man, too bad. But the count was in before you arrived. It seems there are no more oranges. Next year. Yes, next year you will receive an orange."

Brokenhearted, the orphan raced up the stairs empty-handed to bury both his face and his tears beneath his pillow.

Wait! This wasn't how she wanted the story to go. Jean felt the boy's pain, his aloneness.

The boy felt a gentle tap on his back. He tried to still his sobs. The tap became more insistent until, at last, he pulled his head from under the pillow.

He smelled it before he saw it. A cloth napkin rested on the mattress. Tucked inside was a peeled orange, tangy sweet. It was made of segments saved from the others. A slice donated from each child. Together they added up to make one whole, complete fruit.

An orange of his very own.

Jean swiped at the tears trickling down her cheeks. From the bottom of the gift bag she pulled out an orange -- a foil-covered chocolate orange--already separated into segments. And for the first time in weeks, she smiled. Really smiled.

She set about making copies of the story, wrapping individual slices of the chocolate orange. There was Mrs. Potter across the street, spending her first Christmas alone in 58 years. There was Melanie down the block, facing her second round of radiation. Her running partner, Jan, single-parenting a difficult teen. Lonely Mr. Bradford losing his eyesight, and Sue, sole care-giver to an aging mother....

A piece from her might help make one whole. -- By Carol McAdoo Rehme

Go to the next page to read "Owed to Joy," a story about how a father and daughter celebrate Christmas together one year.