The Future of DAR 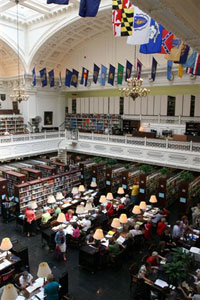 The group may be pushing 118 years old, but DAR still considers itself active and vibrant. DAR's mission stays relevant by honoring the past but adapting to the interests and needs of its current members. President general Linda Gist Calvin says, "Our members carry on the timeless, important work of promoting historic preservation, education and patriotism that was set forth by the founders in 1890, but also work hard to make the organization and its programs relevant to today's women."

For example, the Women's Issues Committee addresses health, family and career issues that affect DAR members. Also, the Project Patriot Committee supports deployed members of the military and their families.

In recognition of members' many time commitments, several chapters are shifting their meeting times. This allows more flexibility for working women and enables mothers of young children to attend chapter meetings.

DAR's continued efforts to recognize once-forgotten Revolutionaries is evident in its recent research and publications. The group is about to release the second expanded edition of its publication "Forgotten Patriots: African American and American Indian Patriots of the Revolutionary War." This is an ongoing collaboration of the DAR Library and genealogy departments to research and document African American and American Indian ancestors who participated in the Revolution.

And, it's not just the changing dynamic of its members and its society that DAR's efforts reflect: DAR is currently in the midst of a 10-year project to restore and renovate the complex of historic buildings that make up National Headquarters.

To learn more about DAR and other related topics, consult the links below.

If you want to join an organization like DAR but your lineage only dates back to the Civil War era, don't fret. There are so many ancestry-based groups that pretty much anyone can find one to join. Take your pick from groups like National Society Sons of the American Revolution, National Society Sons and Daughters of the American Pilgrims, Descendants of Mexican War Veterans or check out the unbelievably comprehensive list at the Hereditary Society Community of the United States of America.