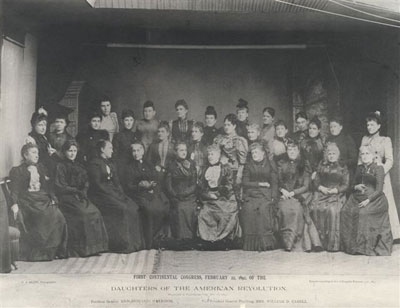 Photo courtesy NSDAR Founders and chapter members meet for the First Continental Congress of DAR in 1892.

DAR currently has more than 165,000 members internationally. With almost 3,000 chapters in both rural and metropolitan areas around the United States, the organization has had more than 850,000 members since its inception. In addition to having chapters in all 50 states and Washington, D.C., DAR has international chapters in the following countries: Australia, Austria, the Bahamas, Bermuda, Canada, France, Germany, Japan, Mexico, Spain and the United Kingdom.

According to DAR, eligibility for membership is pretty simple: "Any woman 18 years or older, regardless of race, religion or ethnic background, who can prove lineal descent from a patriot of the American Revolution is eligible" [source: DAR]. DAR currently has members who are Catholic, Mormon, Jewish, Buddhist and Muslim.

The group's national bylaws mandate that anyone who can prove direct lineage to a patriot will be granted membership. Once she has been approved for membership, she must pay the necessary application fees and membership dues. There's one little catch, though: Once a member has joined at the national level, she is voted on by the local chapter she has applied to. Therefore, chapter membership is not necessarily guaranteed. If the applicant's chosen chapter rejects her for membership, she can reapply to one of the other 3,000 DAR chapters.

It's no simple task to join DAR. If you're lucky, you have a blood relative who already did all of the genealogical research before you -- otherwise, you'll have to start from scratch. There must be a direct and traceable blood relation in order to qualify for membership. Overall, the membership process takes four steps: mapping out your lineage, finding your ancestor, finding your chapter and beginning the application process.

In the next section, we'll learn about membership in DAR.

Current and past members have been major forces in political and social movements. According to DAR, some of the organization's notable members include: